One Card Only - Silver Spx

Today's card kicks off an entire week of Upper Deck cards with a die-cut shiny card from one of Upper Deck's spin-off ranges. SPx was a follow-on from Upper Deck's SP range. When I opened the big box of cards that Richard sent me, I saw this card and mentally filed it as a dupe. But then I realised, it looked a bit different to the one I had already.

These cards are a nightmare to scan, even with the overhead scanner. 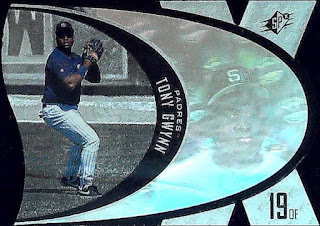 I had a few goes at different exposures! 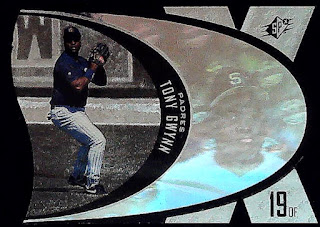 What marks this as a silver parallel is the use of silver foil on the X. The card I blogged previously was blue.
The back is also a shiny scanning nightmare. The back is all silver, even the photo has been colourised to match. 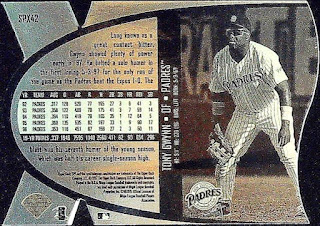 You may have noticed a slight ripple across the bottom of the hologram on the front of the card. This is actually a minor blip on the card. However, when I looked it up on Trading Card Database, I noticed the picture on there also has a ripple in the same place. The person who sent me this card - Richard - also submitted the scan to TCDb! So I think this could be the very same card, or this weird effect happened on more than one card.
Richard's scans are better than mine. I need to get some scanning tips off him!
Total: 814 cards

Posted by Jongudmund at 9:11 AM