Some cards set off the Anachronism Klaxon in my head when I see them. This is mainly when card companies produce retro cards, re-using templates from decades ago. Ironically, I don't get this with the faux vintage card ranges like Allen & Ginter or Gypsy Queen.

The Anachronism Klaxon sounds at varying volumes depending on how much the card is anchronistic. The classic contenders are cards reusing templates from the 70s, like these cards which reuse the 1974 and 1975 card designs. 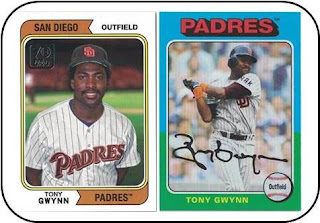 Tony was a teenager when baseball cards like this came out. Although the use of these templates is becoming so common now, it doesn't feel so awkward.
Another way cards set off the Anachronism Klaxon is by re-using a template from a set Tony featured in. In these examples, Tony had cards in the original 1985 and 1986 Topps ranges. His original 80s cards show him in his mid-20s; these later cards depict him towards the end of his career, in his late 30s. Besides Tony looking different, the uniforms and even the team logo on the card are "wrong". 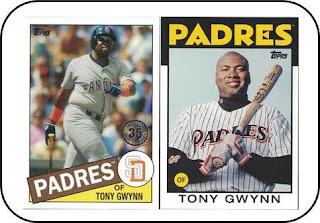 And then there is a third type of card that sets off the Anchronism Klaxon - the faux recent retro card, like this example released by Topps in 2020. 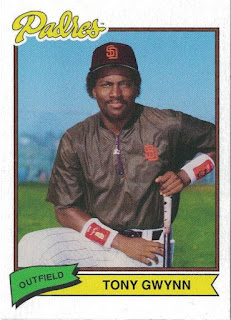 This card is deliberately designed to look like a card from the 70s, as part of the online exclusive set "Super 70s Sports". But this feels odd for a player so closely associated with the 80s and 90s. When I blogged about this card I said it was strange Topps didn't limit the set to players who were active in the 70s - that blog post was where I first thought of a card setting off an Anachronism Klaxon, which means this is probably the most anachronistic card I own.
Although all these examples are from Topps, that's only because they're the worst offenders. Fleer revisted older templates from time to time, and Upper Deck even put out card sets ripping off Topps templates from years before.
The use of older templates is going to continue proliferating in the near future. Topps have basically committed to two retro ranges a year with their Archive and Heritage sets, along with including retro inserts in their flagship product. So it almost inevitable the Anachronism Klaxon will be set off again soon.