One Card Only - shiny map 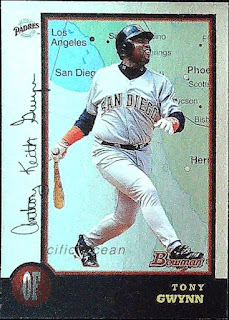 This very shiny parallel of Tony's Bowman card from 1998 has a map in the background instead of the crowd scene in the normal photo. The idea behind this parallel is the map shows a player's home town, which is why in this case they have taken care to show Los Angeles rather than San Diego. There was one International card in every pack of Bowman cards in 1998. 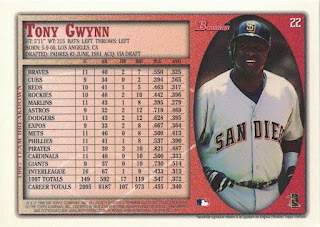 As a veteren in the set, Tony just got a stats box on his cardback. Rookie players got a full bio. If the rookie was born in a non-English speaking country, then their bio was in the language of that country. That makes them slightly more interesting than the average shiny parallel.
Total: 801 cards

Posted by Jongudmund at 9:49 AM