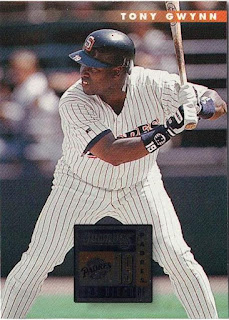 That foil panel between Tony's legs doesn't scan very well. It's a poor choice of placing for such a large graphic element.
The back has a massive stats box and a photo of Tony. Both photos show Tony in the white pinstripes home uniform. They are from different games though, unless Tony changed his wristguards mid-game for some reason. 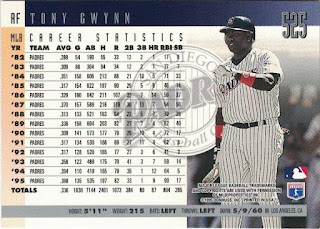 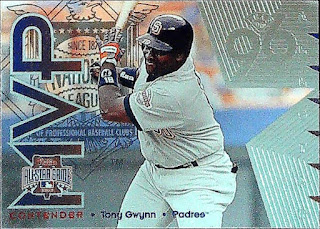 A very shiny card front.
A very complicated explanation on the cardback. 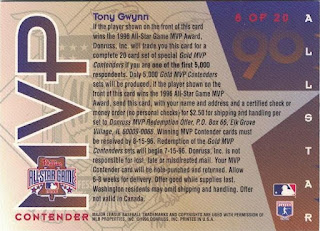 This was a redemption competition based around who would be named MVP in the 1996 All Star Game. Tony was named in the National League squad for the game, but didn't play. Mike Piazza won the MVP that year, so people would have had to send in a Mike Piazza version of this card to redeem it for one the special gold sets of MVP contenders. I wonder how many people did that.
Card Number 798: Leaf Preferred, 1996; #79
This 150 card set came with a "Steel" insert card in each pack. Steel was Leaf's version of Chrome. This is the regular base card. 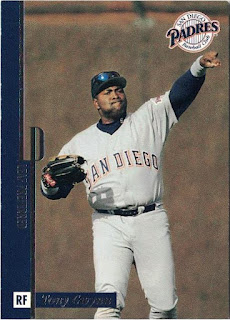 The photo on the front has an odd backdrop and it makes the card look very dull. It's almost as if Tony is in front of a giant sandstone block.
The photo on the back is gorgeous. 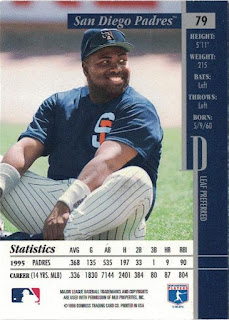 I think that could quite possibly be my favourite photo on a cardback. Look at Tony's grin!
Combined with a simple stats box and a margin of bio-data, I can see why people would prefer this set of Leaf cards.
Total: 798 cards