Tony was a 'Big Play maker' according to this subset. 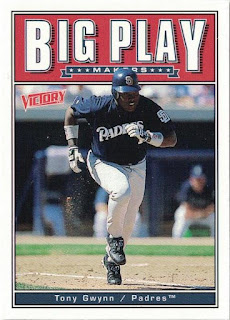 This was from the first year of Victory sets. Upper Deck used the branding in other sports too and issued Victory cards for five years.
Design-wise, I like this card. It's bold. It's colourful. Tony is kicking up a clod of dirt in the photo. It also looks a lot like a DonRuss card at first glance (or is that just me?)
The back explains why Tony qualifies as a 'Big Play Maker', noting that he was on the brink of joining the elite group of players to record 3,000 Major League hits. 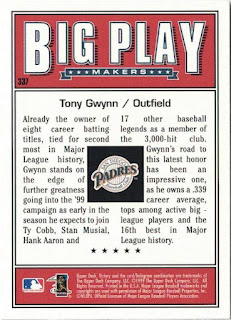 Card Number 766: Upper Deck Victory, 1999; #338
The very next card in the debut Victory set featured Tony in another subset - 'History in the Making'. 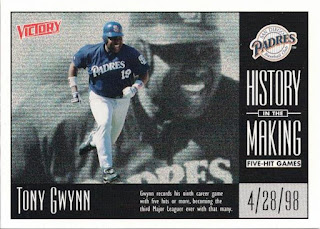 The overlay of Tony running on a background made to look like a TV image is quite effective. The date history was made was the 28 April 1998. There are more details on the cardback. 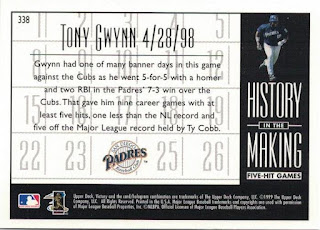 I wonder how demoralised the Cubs pitching staff were at the end of the game after Tony had gone 5 for 5 in his plate appearances. They must have been glad to see the back of him at the end of the game.
I've thought occasionally of going through all the cards and listing the other baseball players who get mentioned on Tony's cardbacks. Ty Cobb has been mentioned on loads. Realistically, I probably won't ever get round to doing that. It would be a fun diversion though.

Further on in the set, Upper Deck gave Tony a 'Rookie Flashback' card. 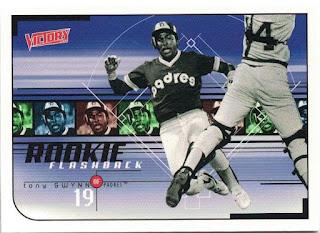 Despite being totally devoid of context, it's evident that is a picture of Tony sliding into home plate, given the player in front of him is wearing the strapping for catcher armour. It looks like it could be a photo from Tony's rookie season - 1982 - in which case there were three catchers who wore #14 in the National League that season. They were Alan Ashby (Astros), Mike Sciosa (Dodgers) and Matt Sinatro (Braves). Ashby played 100 games and Sciosa played 129 games that season, so they seem to be the most likely to be the mystery catcher in this photo. 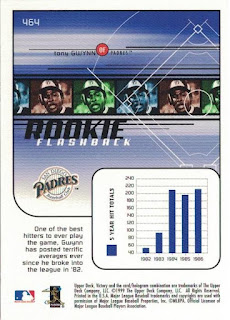 This is Tony's base card from the second year of Victory sets. If it looks familiar, that's because a shiny blue foil parallel "Ultimate Victory" version was in the first blog post about Victory cards back in July 2020. 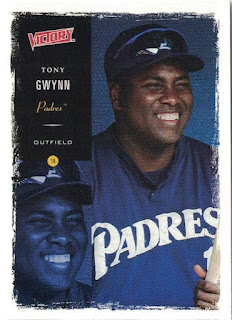 This card design doubles up on Tony's smiling face. No complaints here!
The cardback is quite dull.The stadium picture in the watermark under the stats box is the same on every card in the set. I don't know which stadium it is; odds are high it's not Jack Muprhy stadium. 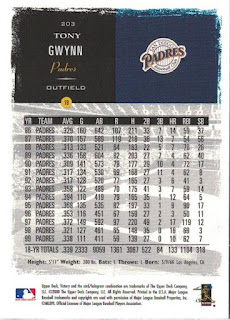 Posted by Jongudmund at 8:33 AM