Before I collected baseball cards, I collected football stickers. By football, I mean soccer. I still have the first Panini sticker album - Football '85 - that I filled, in partnership with my little brother. It's quite tatty now, but it is 36 years old! In 1986 we completed the Fifa World Cup sticker album by Panini. We didn't collect the regular football stickers in 1986 or 1987, although I do have incomplete albums that I acquired off friends.

Then in 1988, my brother and I collected the Football '88 stickers. They had bright yellow borders, in one of Panini's more exciting design templates. Those football albums by Panini in the mid-80s were the pinnacle of sticker collecting in my opinion. In addition to all the first division clubs, the albums included the second division teams and club badges, the teams in the Scottish Premier Division, and additional features.

In Football 88 one bonus spread focussed on the celebrations of the Football League's centenary season. There was also a page of 'Second Division Heroes' with a few players from the second division clubs featured. Unfortunately, none of the players from the team my family supported, Shrewsbury Town, made the cut for that feature.

I had, of course, had my first encounter with baseball cards in 1987 (which I recorded in my diary!). But it was those Panini football stickers that started me off collecting this sort of thing.

What I didn't know, however, was that Panini had produced baseball stickers in the 80s as well. It was a real surprise when I went carefully through the parcel that Richard sent me to find two stickers. And as I picked them up all those memories of collecting football stickers in my childhood came flooding back. 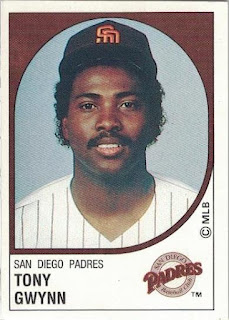 As with the football stickers, each team in Baseball '88 had a double page spread in the album with 12 player stickers, two stickers that made up a 'league leaders' image, a foil sticker of the team logo and another foil sticker depicting the uniform.
The back is very plain. These were going in an album and the peeled backs would be going in the bin, so there was no point printing anything on them. 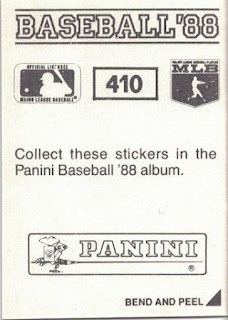 Tony isn't pictured on the Padres 'league leaders' stickers. But later on in the book were some action shots of various players in a 'Highlights' spread. 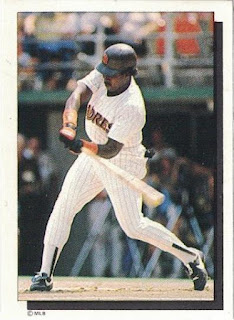 It's not the most exciting photo, really. Although, there is a TV camera on a tripod in the background, which is a bit more interesting than the usual empty bench.
The back is plain again. 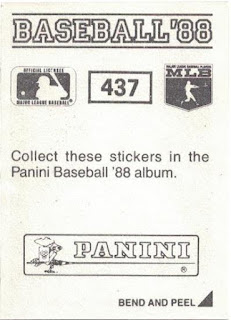 One day, maybe, I will pick up a Baseball '88 album and see what these stickers would look like if they had ever been stuck. Until then, I'm happy just reminiscing about my childhood collecting.
Total: 785 cards

Posted by Jongudmund at 9:36 AM