On this blog I sometimes talk about the UD Boundary. This is a reference to the geological event that wiped out the dinosaurs, generally thought to be a massive asteroid impact. The fall out from the huge impact left a small layer of iridium across the planet's surface and this is visible in geological strata everywhere. This is known as the KT boundary. It's link to the extinction event is surmised because no dinosuar fossils appear in undisturbed rocks above the KT Boundary.

The couple of seasons between 1990 and 1992 are the "KT boundary" of the card hobby. As we excavate the card strata, on one side of the boundary are the fossil dinosaurs, cards with poor focus, cheap card stock, black and white print on the card backs, and on the other side of the boundary are fossils of the new mammalian masters of the card world, bright, glossy cards with full colour photos on both sides printed on much better stock.The jury is out on what caused the rapid extinction of the old cards. The blame is often placed on the Upper Deck meteorite, which landed in 1989 and was hugely popular. But the Upper Deck meteorite was not the first impact on the card world. Score were running pictures on the backs of cards prior to Upper Deck's arrival. However, Upper Deck arguably had more of an impact than Score, so UD Boundary works better as a descriptor. 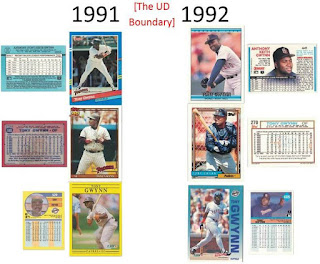 What followed the UD boundary was a veritable explosion of diversity in forms of baseball cards. I have called this the Cambrian Explosion of the card hobby, which is another geological reference. Cambrian era rocks suddenly display a huge amount of fossils compared to older rocks, and show rapid development of multi-cellular complex organisms that appear at a fantastic rate of diversification.
The Nineties after the UD Boundary (which I date to the winter of 1991-1992) is the Baseball Card Cambrian Explosion. There was a massive proliferation of card manufacturers each producing all kinds of different sets. This mirrors the massive societal changes of the Nineties caused by the digital revolution, the dawn of the Internet, and the growth in personal computers.
As I reflected in another blog post, the 90s was the decade when the pace of change accelerated. In a way, change itself changed. Baseball cards at the start of the decade were cheap things on brown cardboard that came with gum and by the end of the decade some of them were CD-Roms.
(Full disclosure - I'm NOT a geologist. Please don't rely on these descriptions as technically accurate. They are metaphors only!)