One Card Only - Run Producer!

In between the two big parcels that arrived last month, was a single card in a plain white envelope that I bought from Jay, who is a member of a Facebook group dedicated to insert cards from the 1990s.

These die-cut inserts of "Run Producers" were inserted at a rate of 1 in every 72 packs in the second series of the Upper Deck flagship set. That makes them reaonably rare. 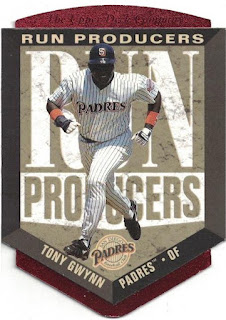 The red top and bottom of the card are foiled, and as you can see from the scan, prone to getting dinged up. The Upper Deck Company is emblazoned in a cursive font along the red top of the card.
The way 'Upper Deck Showcase' is written on the back made me think it was the name of the set initially. 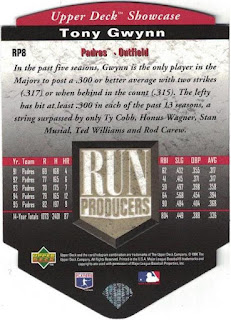 Every so often I point out which other players get mentioned on a cardback. Here Tony is compared with Ty Cobb, Honus Wagner, Stan Musial, Ted Williams and Rod Carew. That's an impressive line-up of baseball players!
Total cards: 786

Posted by Jongudmund at 9:16 AM