One Card Only - Focus Pocus

This card arrived in the mail from Jeff at Wax Pack Wonders. It combines a lot of things I appreciate about baseball cards on the cusp of the new millennium. A long-forgotten set range, a name for an insert set that feels borne out of creative deaperation, and shininess! So much shininess!

Somebody was tasked with thinking up a name for a shiny insert series and really struggled. The best they could imagine up was Focus Pocus. Like the magic words Hocus Pocus but with an F. Maybe the Fleer employee in question was a fan of the film from 1993 starring Bette Midler and Sarah Jessica Parker.

Anyway, here is the card, which got focuspocussed up on my flatbed scanner. 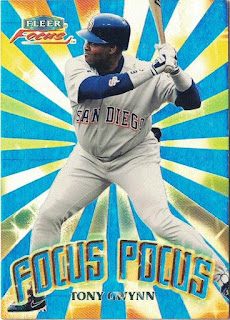 My flatbed scanner (a Brother DCP-L25000 for reference) really likes picking up the blue part of the spectrum in shiny cards. Because the card looks nothing like that scan.
My overhead scanner (made by Kinghun and bought off Amazon) captured it more accurately. 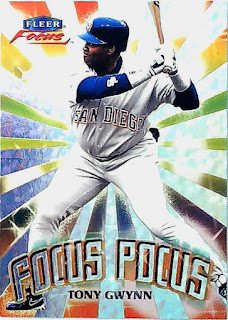 The back isn't shiny. It's very colourful though. And so is the write-up, which references Tony using his baseball bat like a "magic wand" and hexing opposing pitchers. (Which I'm pretty sure would contravene some rules!) 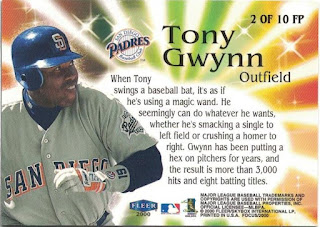 As I've collected several cards produced by Fleer towards the end of the 90s, I've noticed some very florid descriptions on cardbacks. Mainly they appear on Fleer cards released under Skybox branding, but sometimes the copywriting staff were let loose on cards in other ranges too, especially after Fleer was bought by the owners of the Rite Aid chain of pharmacies in 1999. (Fleer had a turbulent time at the end of the decade. They were owned by Marvel before being sold off when Marvel went bankrupt!)

I just want to say thanks again to Jeff for sending me this little bit of magic from the beginning of the millennium.

Posted by Jongudmund at 8:46 AM