It would have been Tony Gwynn's 60th birthday today, so I thought this would be a good day for me to start my blog about my personal baseball card project: to collect 394 different Tony Gwynn cards.
Why 394? Well that was Tony Gwynn's batting average at the point when the season was cancelled in 1994. It is the highest batting average achieved in modern baseball over the course of (most of) a full season, when a player has had a decent amount of appearances at the plate.
These are the rules of the project.
1) The cards must be different to count towards the 394 target.
2) The cards will be ones that I own, in that I physically have a copy to scan myself.
3) The numbering of the cards in the project will be the order in which I post them.
4) Other rules can be added as I go along.
This is the first post, and I've decided this will be my first card to post.
Card Number 1 - Topps 1987, #530 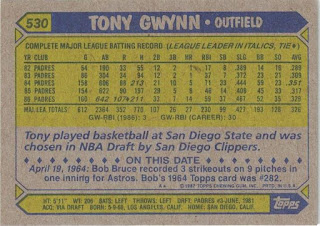 From the back we learn that Tony played Basketball for San Diego State University. That's understating it. He attended University on a basketball scholarship - it was exclusively basketball and at first he wasn't allowed to play baseball! If he hadn't become a pro baseball player he would have been drafted for the NBA team in San Diego.
Some collectors don't like this card design but for me it is the first thing I think of when I think of baseball cards because the Topps 1987 set was the first time I encountered them. I went on a family holiday to the USA and bought packs with my holiday spending money. Back home I had football stickers where you got 5 in a pack. In America you got a crazy amount of cards in a pack and they were actually card, not stickers. I had no idea what any of the information was referring to, or what the tables meant, but that somehow made it even cooler.
So, anyway, my nostalgia is why I picked this as the first card in the project. If I was being completely objective, it's not a great photo of Tony. You get to see his ear and his chin. I'm not sure who the Catcher is. He has number 29 on his helmet. Someone out there will know.
Fortunately for Tony, this wasn't his only card in the 1987 Topps set. Because Tony was also an All Star.
Card Number 2 - Topps 1987, #599 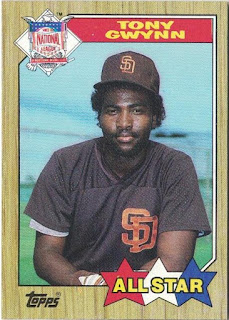 Now, that's a better card. You can see his face! He's also in a lovely classic brown and orange San Diego uniform. 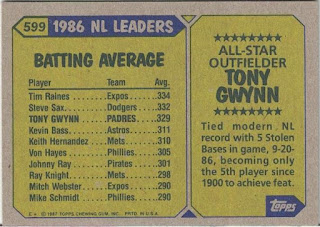 Over the years, Tony was an All Star a whopping 15 times! On the back of the card we see him in some illustrious company. The little factoid on the right is impressive as well - 5 stolen bases in the same game.
2 cards down. 392 to show!
Posted by Jongudmund at 3:37 PM

Email ThisBlogThis!Share to TwitterShare to FacebookShare to Pinterest
Labels: 1987, All Star Card, base card, Topps