These 'twins' are from an experimental range created by Topps that has that rare distinction of being a 'one and done' set, as it only appeared for one year.
Card Number 788: Topps Embossed, 1995; #6 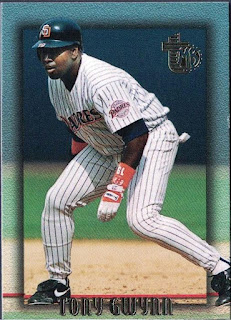 It's hard to tell from the scan, but Tony has a slight 3D effect because he has been pushed forward on the embossing machine.
The cardback is also affected by the embossing, as the impression of Tony is reversed out. 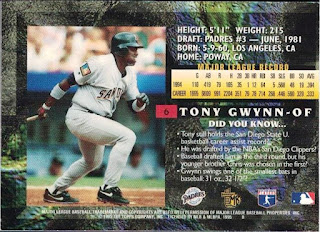 The 'Did You Know' facts are about Tony still holding the record for assists in basketball in San Diego State University - which is still the case in 2021! - and being drafted by the Clippers as well. It also mentions that while Tony was a third round draftee, his brother Chris was drafted in the first round.
Then there is a comment about Tony having the smallest bat in baseball - which might not have been true any more in 1995 as he had switched up in size following a discussion with Ted Williams a few years previously. I suspect that once a 'fact' entered the big Topps reserve of factoids for cardbacks, it would never get updated.
Gold parallels were a big thing for Topps in the 90s. Topps did it in this set too with one gold parallel card inserted into every pack.
Card Number 789: Topps Embossed Golden Idols. 1995; #6
This was basically the same card, just printed in gold. The flatbed scan actually shows up the embossing effect, if nothing else. 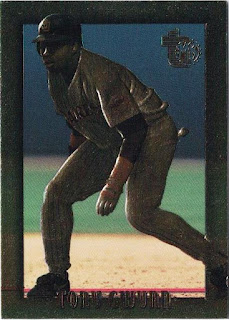 I had a go with the overhead scanner. This is probably the closest I could get to what this golden card looks like in real life. 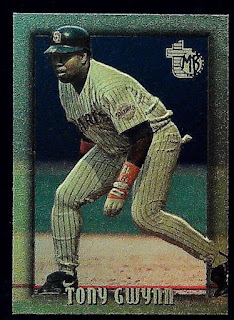 By fiddling around with the exposure, I could get is a bit brighter 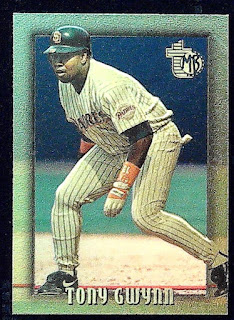 I think the cardback is identical to the regular release. I scanned it because I'm thorough! 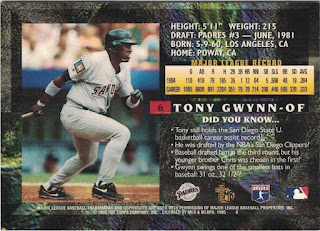 This unusual one and done style of set is a reminder of how innovations in the hobby didn't always pan out. Topps occasionally used embossing in their insert cards, and other companies sometimes gave it a go as well. But as a gimmick for an entire set it didn't really work.
Total:789 cards
Posted by Jongudmund at 8:33 AM