Remember Topps Tek? Topps kind of revisited that 90s madness with a six year run of sets called High Tek from 2014-2019. Like the original Tek sets, these 'cards' were printed on acetate. In 2019, there were 112 cards in the set and 9 parallel versions of each card. 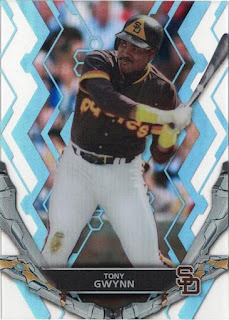 The blue outlining on this is a relic of it being scanned on my flatbed scanner. This is not a blue parallel - in real life it looks like the image on Trading Card Database, with a shimmery foil effect where the blue lines are on this. (That image on TCDB was uploaded by Richard - Hi Richard! - who also sent me this card.)
The scannerific blue effect is also visible on the back. The blue parallel card images on TCDb don't have the blue effect on the back, which is why I can say for certain this isn't the blue parallel version. (That image on TCDB was also uploaded by Richard - Hi Richard! - as you might expect from a supercollector.) 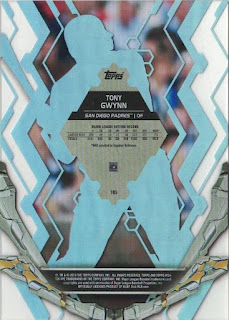 There isn't much else on that cardback.

I don't know how popular acetate cards are. Topps seems to have pulled back from producing them the past couple of years. One advantage they have is that they don't curl like a lot of shiny regular 'chrome' cards curl over time. They also stay in place on the scanner even if the scans come out a bit odd.

Posted by Jongudmund at 8:13 AM