I thought Panini had started releasing Diamond Kings as a range in itself in the years after the company acquired the rights to various DonRuss ranges. I've now discovered that DonRuss started doing it at the start of the millennium before being swallowed by the Panini empire.

However, the first card in today's post comes from the 90s, when the Diamond King cards were an insert series in the DonRuss flagship set. 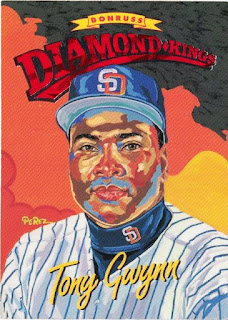 This is a very bold artwork with Diamond Kings emblazoned in red foil above it. The painting is by Dick Perez, who also painted Tony for the 1985, 1989 and 1996 Diamond Kings cards. It's to Dick's credit that his paintings looked quite different to each other. This is a very effective portrait.
The back is a little bit dull in comparison. It also gets dinged for gratuitous use of justified text. That's just one of my personal dislikes, but my justification for not liking justified text can be seen at the end of the second line where 'arthroscopic' is split over the two lines and the last two letters appear on the line below. 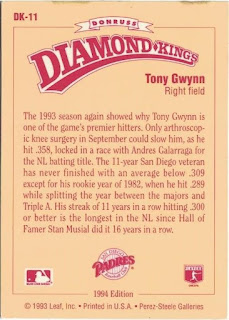 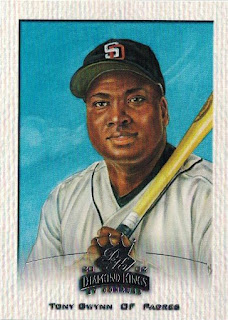 This is printed on a high quality, canvas-effect board. The way Tony's name is arranged it looks like 'Tony Gwynn of Padres', but the 'of' is actually OF, denoting his position as an 'outfielder'.
DonRuss had moved on from commissioning art from Dick Perez. The cardback credits this to Mark Turnes. A Google search turns up several examples of his sports artwork, but he doesn't seem to have a website. 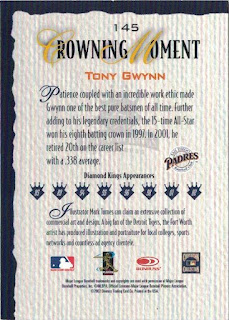 The cardback also has a handy line up of Tony's Diamond King appearances, which acts like a mini checklist. I will round out the set when I add his 2001 card to my collection!
Total: 781 cards