Here are some cards that have already been on the blog. Sort of.

In 1999, Pacific messed with the heads of collectors by having cards with the same number and different photos in their flagship set. I've previously blogged the portrait version of this card. 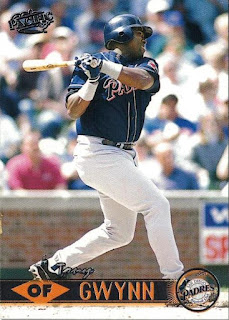 Last time I blogged about this I noted the quirkiness of the factoid on the back - about Tony hitting his 2,900th hit in the preceding season. That would be eclipsed in 1999 by his 3000th hit! 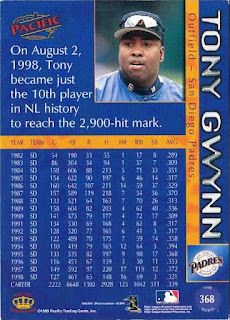 I really like the shade of blue on that cardback.

This is a sample card given away to promote the Aurora range. The front looks like the regular card... at first glance. 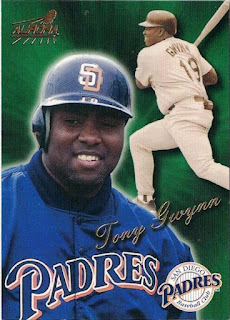 But when they are next to each other in the binder they look quite different. 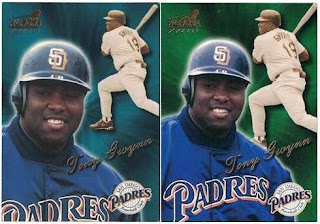 It's a bit like a spot the difference picture. The background colour has changed. Background Tony is bigger. Foreground Tony has moved further away.
And in case of any doubt, the cardback has SAMPLE written across it. 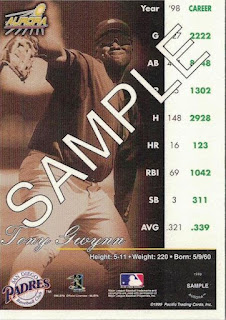 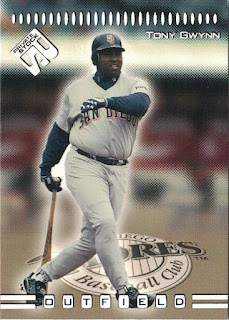 Different card companies have different 'giveaway' design tics. One of Pacific's giveaways was outlining players with a glowing aura. It's really evident on this card.
The free-floating logo behind Tony's knees feels like an on-screen graphic from a highlights show.
The cardback is committed to presenting all the detail of a particular game - Tony's eighth game where he recorded five hits. 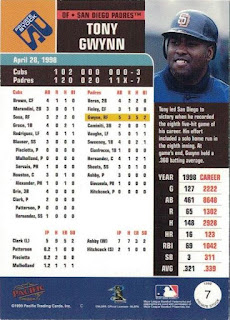 In addition to the box score from the game in question, there is a well-arranged stats column that puts Tony's figures for 1998 into context against his career figures. I would award an extra bonus point for that if I was scoring this card.

1999 was a busy year for Pacific. I have 21 Tony Gwynn cards issued by Pacific in 1999 and there are even more yet to be added to the collection!

Posted by Jongudmund at 7:54 AM