Toppeechee cards from the 80s

I was surprised when I first researched O-Pee-Chee cards that the name came from an Ojibwa word meaning 'robin' . The Ojibwe are Canada's second largest First Nations tribal people and a large number live in the USA as well. In Canada they tend to live in a large area that stretches from Quebec to British Columbia.

In my ignorance, I just assumed it was a way of phonetically spelling 'Oh, peachy!' But, no, it has a much deeper meaning, and in terms of languages on baseball cards, it has to count as another one along with English, French, Spanish and Chinese characters. Technically, the Ojibwe people speak one of the Algonquian languages, but for the purpose of this blog, I'm just going to count it as Ojibwe.

For most of the 1980s, O-Pee-Chee had a licence to reprint Topps cards. They often released smaller sets, added their logo on the front and changed the cardbacks so they had information in English and French. The cards were sold in Canada but seem to have travelled reasonable quickly to collectors in the USA.

I've blogged a few of these "Toppeechee" cards before - here is Tony's rookie card, and also his card from the 1986 set. Richard included a few more in his recent parcel, which I mentioned in the box opening video, and here I am, blogging about them today. 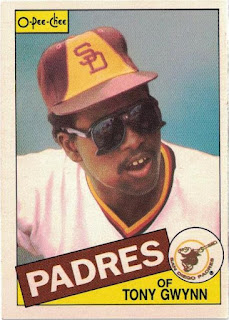 As I noted when I blogged about the Topps release of this card, Tony has a visible wad of chewing tobacco in his cheek. Tony started 'dipping' when he was in the minor leagues at Walla-Walla, and was never able to shake the habit although he apparently tried several times. This card foreshadows his early death from oral cancer.
In terms of being bilingual, most stuff on the back is translated. However, this would not pass the requirements for translation in my workplace where everything has to be fully bilingual. 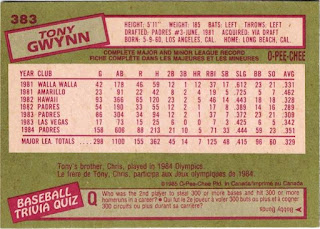 This is my favourite ever Topps set (for sentimental reasons!) and the Topps version of this card was the very first card on this blog. Even though this is my favourite card set, this is one of the worst photos of Tony ever used by Topps on a card. And that is a very low bar to clear!
The back is very crisply printed. The 'On this Date' factoid is also in French as 'Une Date Memorable'. 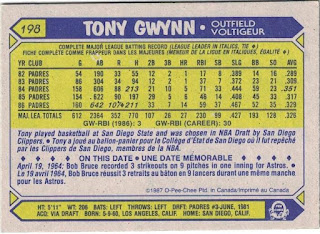 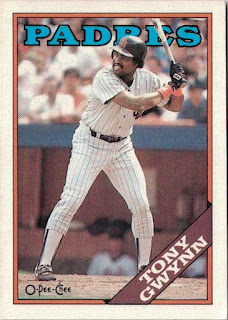 There is something about the way Tony's stance perfectly frames whoever that person is sat in the dug out that makes me chuckle every time I see it. Tony's pinstripes look absolutely pristine in this photo as well.
The little baseballs in the background make the top of the cardback a bit hard to read, but it's a nice design. 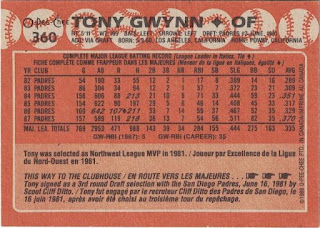 I am pretty sure I have pointed out Topps's obsession with recycling factoids about Tony's minor league achievements on their cardbacks. On this card they don't mention that Tony was batting champion the previous season, with an outstanding .370 batting average - the highest so far in his career. Instead, we learn about how Tony won the MVP in the Northwest League in 1981, in both English and French.

From 1989 O-Pee-Chee started releasing the full Topps sets complete with the Topps logo on the front and bilingual cardbacks. They did that for three years, then started releasing their own flagship sets. In 1994 they released their last set of Major League Baseball cards. Since then the brand has been through a few different owners and now is licensed out to other companies for use when releasing trading cards.