It's Upper Deck week on my blog. Usually Mondays are days when I show a 'modern' card, but as Upper Deck haven't released any baseball cards since they put out an unlicensed set in 2010 and got sued by Topps, today's cards are just a bit "more recent" than the other cards I will be showing this week. They were issued after Tony retired and are a mere 16 years old.

Tony appeared on five cards in this 200-card set. I am blogging three of them today and I'm doing them out of numerical order. 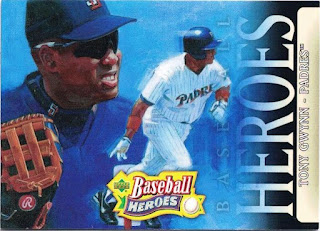 Numerically, this was the highest numbered of Tony's cards in the set, but I think it's the ideal card to kick off this post.
The back gives a short precis of why Tony is a baseball hero. 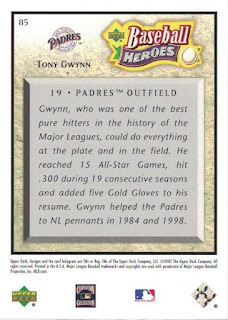 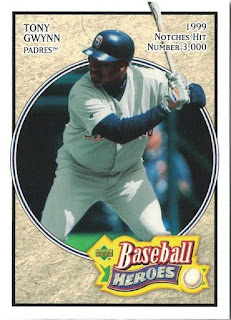 Unlike when some other card companies commemorated this milestone, Upper Deck got all the facts right on the back. 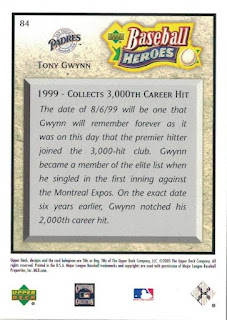 The synchronicity of Tony's career milestones always seems remarkable. He notched up 1,000 hits in exactly six years - to the day!
Card Number 817: Upper Deck Baseball Heroes, 2005; #83
This card also marks an achievement from 1999 - Tony's 15th appearance as an All Star. 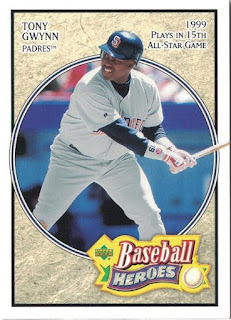 While Tony was named in the All Star Game line up, he didn't actually feature in the game, so there is a slight error there in the way they report this. He was sat with the reserves, though. On the back that's described as "participating". 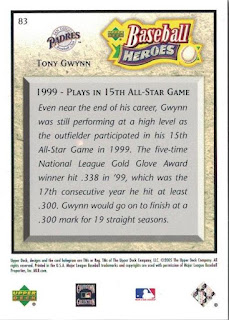 Tony received the All Star call up 15 times, and went up to bat in 13 actual games. 13 is still very impressive.
There are another two cards featuring Tony in this set - numbers 82 and 81. For now they are on my list of cards to get someday!
Total: 817 cards

Posted by Jongudmund at 8:12 AM