One Vid Only - Opening a box from Richard (YoRicha)

I have been very fortunate while doing this blog that other collectors have got in touch and sent me cards all the way from America. Tim from Pennsylvania, Jeff from North Dakota, and now Richard from Georgia.

If you read the comments on here, Richard often comments on posts as YoRicha. A little while back he said he had some things to send me and late on Friday I picked up an unexpectedly large box from the post office after the postman stuck a note through my door telling me to go and collect it.

I decided to do an 'unboxing' video on my phone, just for fun. However, when I uploaded it to YouTube it would only load as a portrait video for some reason. YouTube has removed the functionality to rotate videos, which is irritating. I have wasted too much time trying to fix the problem, which I think is probably down to an old phone and incompatible tech. Oh, well.

My suggested fix for you is to watch this video on a phone or tablet and physically change the orientation of the device if you want to see me the right way up!

There was a huge box of cards in the box. Here's a better look. 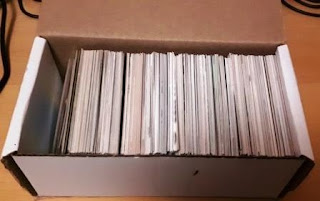 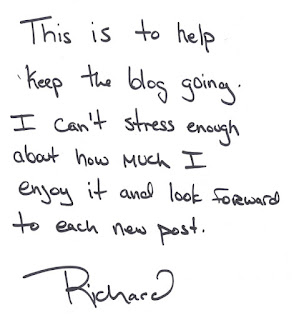 That is such a nice thing to say. There are a few people who comment on the blog regularly and I appreciate them taking the time to leave a note (or do my research for me!). I'm really glad people enjoy it and with Richard's help I am going to be blogging throughout the winter at this rate!
Back when I started this blog I had almost 200 cards scanned waiting for me to write about them. I'd barely dented that when I acquired over 200 more cards, which I scanned and gradually worked my way through. Since the turn of the year I have been blogging on a more ad hoc basis, as cards arrive. However, with the parcel from France, the envelope of cards from Jeff this week, and now this massive box of cards from Richard, I'm going to be back on that daily publishing schedule.
As long as I can carve out the time to write the posts, of course.
I did promise in that video that I would let you know what my grand total of Tony Gwynn cards is now. Well, I don't want to deal in spoilers, but the cards from Richard took me into four figures! So I have a lot of catching up to do with my blogging!
(Also, I was wrong about the coin - it wasn't a Topps coin. All will be revealed in good time!)
Thank you again, YoRicha!
Posted by Jongudmund at 1:19 PM