Rather than blogging two cards that look the same today, I'm going to blog the chrome versions of cards that have been on before. 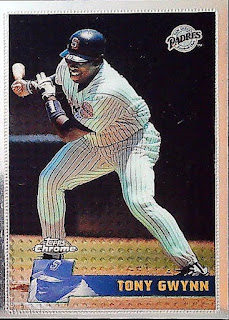 I used the overhead scanner on this as Chrome cards don't come out very well on my flatbed scanner. The way the light caught it means the frame seems to fade away. But at least you can see Tony. Although, as I said when I blogged the ordinary version of this card, this is probably one of the worst cards of Tony produced by Topps in the 90s. I dislike the distorted cameo portrait along the bottom and it looks no better in shiny chrome.
The cardback has a different number but is otherwise the same as the normal cards. There were only 165 cards from the flagship set given the chrome treatment in 1996. 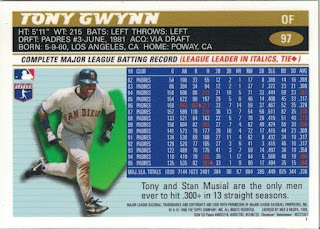 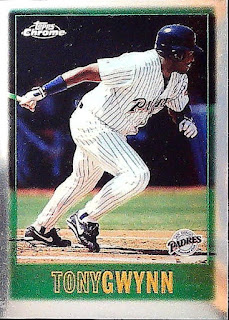 This is actually the fourth version of this card I now have in the collection. The other three were blogged as a trio last year. Again, the overhead scan has affected the shiny silver border.
Tony made the cut again in this 165-card set. Topps haven't always shown such restraint - some years they have chromatised the entire set! 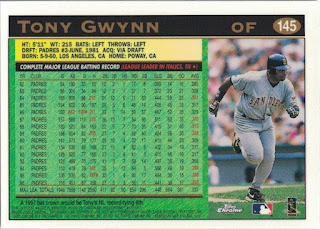 As cardbacks go, it's not very exciting. The stats box is so big there is barely any room for a factoid.
Total: 804 cards

Posted by Jongudmund at 8:08 AM