Studio was a slightly more upmarket set produced in the 90s by the company that released the various DonRuss and Leaf branded sets. (Sometimes the copyright notices are for DonRuss; sometimes they are for Leaf - it's all over the place!) In later years Studio fluctuated between being Leaf Studio and DonRuss Studio, but before that they were just 'Studio'. 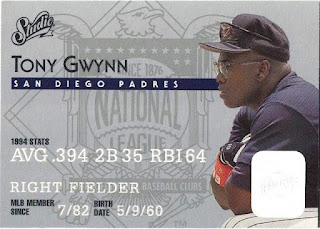 Previous Studio sets had been portrait photos taken in a Studio. The photography cost must have been reasonably high for those sets. In 1995 they opted for a very different design. Each player in the 200 card set was featured on a "credit card" template, that included embossed statistics in the middle. As luck would have it, the timing of this means that Tony's card includes his most famous batting average.
The photo is still interesting though, as it's a rare picture of Tony wearing glasses (that aren't sunglasses).
There's a 'signature' on the back, just like a real credit card. 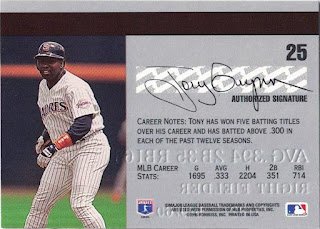 There were 7 cards in each pack and every one of them had a 'plastic' card alongside six of the ordinary cardboard base cards. The plastic cards were gold or the much rarer platinum. The colour scheme was presuambly chosen to mimic the colours of different classes of credit cards. 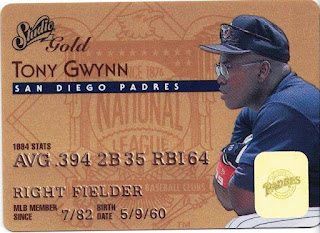 Even the hologram is gold! The plastic has rounded edges like a credit card. It is about the same thickness and the embossed details are quite prominent.
Only 50 players were selected for the gold card treatment. (That number dropped to 25 for the platinum series). 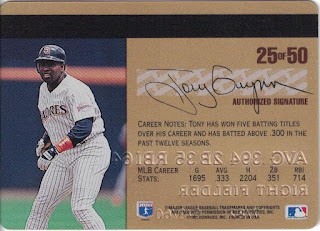 These cards still feel quite different, over 25 years after they were released. This was the last time the range was relased just as 'Studio' and the set went back to using posed portraits in subsequent years (blogged here), so maybe this innovative approach didn't appeal to collectors. However, I think the set designers deserve some credit for trying something new and unique with this set.

Posted by Jongudmund at 9:02 AM