When I started this blog I was aiming to collect 394 cards featuring Tony Gwynn. To think that almost a year and half later I am posting my 394th blog post is a bit surreal. I've picked a stand out card for this blog post. It was the card that sealed the deal for me in buying a large parcel of cards from Greg in France a few weeks back. 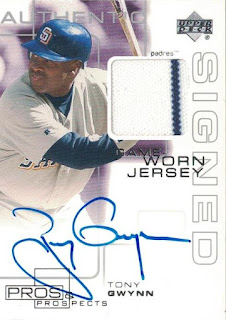 Tony's penmanship is lovely on this card. The blue ink is naturally streaky, which makes it look like it has been hand-signed. However, there are no other images to compare it with on Trading Card Database to see if there are variations. It's also great that the swatch of jersey has a pinstripe on it, instead of being a plain white patch. And as a final bonus, this is a relic card released during Tony's career!
According to BaseballCardPedia, these autographed memorabilia cards were included at a ratio of 1 every 96 packs. (Which feels like quite good odds to me.) There were 21 cards in this range of relic inserts. Tony's cards were denoted as TGw, because there were also cards signed by Tom Glavine, denoted with TGl. 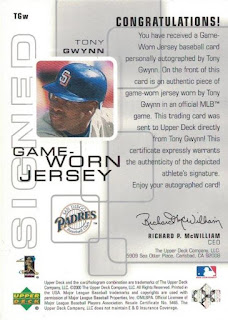 The back doubles up as a certificate of authenticity. This is how card companies used to reassure collectors that the cloth swatch was genuinely connected to the player on the front. Somewhere along the way that has been lost.

I feel this card is eminently suitable for an arbitrary personal milestone! I hope you agree. Thank you for reading my blog, and commenting, if you are one of the people who comments. I appreciate people taking the time to leave their thoughts and am grateful for all the encouragement.