These cards had a logo saying Starline on them, but on Trading Card Database, they were listed as Starline Long John Silver. I couldn't find any details of where this set originated from until, on the second page of Google results, there was a blogpost by Fuji, who often comments on my blog, all about them.
I regard Fuji as a reliable authority on Tony Gwynn cards and baseball cards in general. So, this is what he had to say about these cards:

These cards were distributed by the Long John Silver restaurant chain back in 1990 over an 8 week period. Each week, the restaurant would hand out a different cello pack that contained 6 cards: a header card plus 5 player cards.

There is a great picture of the entire set, complete with all the header cards on Fuji's blog [relink], but I'm just interested in the two cards that I recently acquired. (Incidentally, that blog post by Fuji is from 2011 - thank goodness the Internet never forgets!)

These would have been given out in the packet distributed in week one of the two month promotional period. 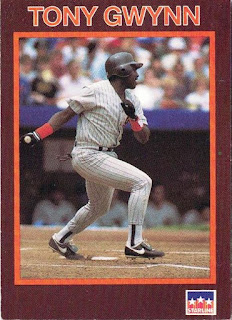 At first glance I thought the picture on the front had been airbrushed to remove any logos from Tony's uniform.
However, the photo on the back includes the SD logo on Tony's hat and the word Padres on his training top. 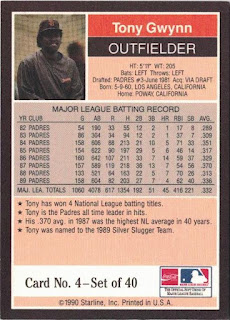 This is a decent cardback for an oddball giveaway, with some bullet pointed factoids and a full-sized stats box. As early as 1990, Tony was the all-time leader for the Padres in hits. Nobody else has come close to his totals since.
Card Number 770: Starline Long John Silver, 1990; #29
This card was in the set given out in week 6 of the promotion. 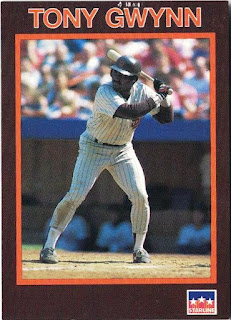 The white mark above Tony's name is a scuff mark. These were giveaways in restaurants. Some minor marks on the cards are to be expected. The Padres logo on Tony's helmet and shirt are clearly visible.
The photo on the back includes a recognisable member of the crowd pulling a slightly goofy face just behind Tony. Imagine making it onto a baseball card and then realising that you had a funny expression! 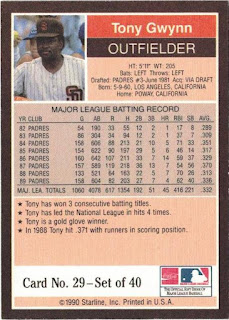 The biodata and stats box are the same as the other card in the set, but the four bullet point factoids are all different. The bullet about Tony's hitting with runners in scoring position is a neat little statistic.
The cards also include the Coca-Cola logo on the back, so presumably Coke contributed towards the production of these cards.
Long John Silvers is still going with over 700 locations in the USA. It's a seafood restuarant named after the famous character from Treasure Island, that looks to serve UK-style fish and chips (battered deep-fried fish with chipped potatoes). They also do "lobster bites". Sadly it doesn't seem that baseball cards are still on the menu!
Total: 770 cards

Posted by Jongudmund at 9:00 AM