Ah, the very late 1990s, when the world suddenly got interconnected and we started to wonder how long it would be before humans ended up living in the matrix, enslaved by the technology we had created.

Card companies approached this culture change in different ways with different 'techie' ranges. And one of the companies that bought into the cybervision of the future was Upper Deck with their Ionix sets. They even went so far as to shrink their brand name to UD to make it more futurey. 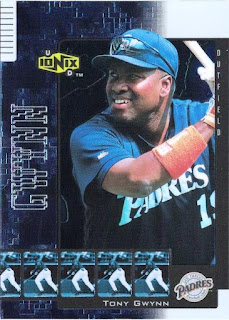 This card has a metallic chrome style coating on it which makes it hard to scan and has caused a slight warping effect over time. I like the coding font used for Gwynn up the side of the card. The little sequence of photos that look like a film strip look quite effective too.

On the back, Tony is looking skyward anticipating a catch. The coolness of the photo makes up for the truncated stats box. 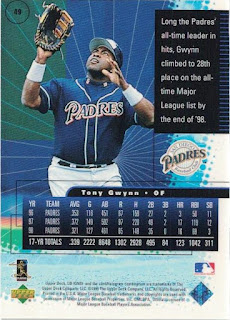 There's a relevant factoid as well, about Tony's place on the all-time hits chart. He would break 3,000 hits this season. 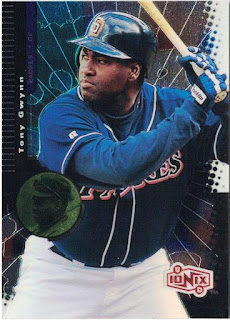 The next year, Ionix cards had a stronger chrome-like effect applied to them. I put this card under my overhead scanner to try and get a better image of it. This captures the foil cameo portrait reasonably well, and boosts some of the other colours in the background. 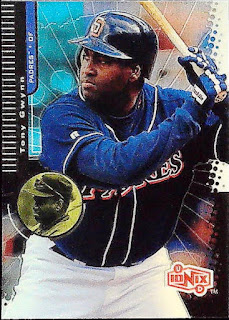 The back isn't coated and scans like a normal card. The warping is more evident from this scan. 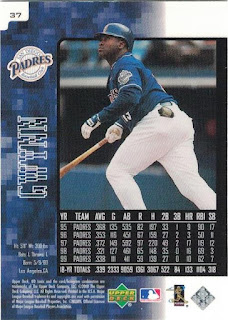 The truncated stats box is a negative, but the coding font reappears, so the negatives are cancelled out on this factoid-less cardback.
Upper Deck dropped Ionix after just two years, so this represents a complete run of Tony's base cards from this range.
Total:755 cards
Posted by Jongudmund at 8:26 AM