I'm not really sure where to file E-X cards. Trading Card Database lists them as both Fleer and Skybox ranges, which was the same company at the time. I think they just flipped a coin to see which company name got stuck on the cards in a given year. 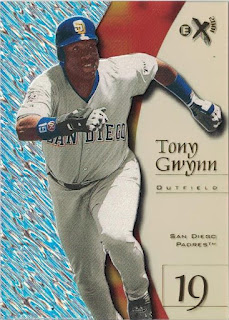 I am dinging this acetate card a point for having a year in the set name that isn't the year it was released. Hunting it down on TCDb was a pain!
There were 100 cards in this set. The scanner has picked up all the blue in the silvery streak on the left. The right hand side is clear, but a bit yellow with age. This is the acetate version of the warping that happens to chromatised cards.
The back is as odd as any other acetate card. Because of the see-through nature, Tony's disembodied hand looks a bit spooky. 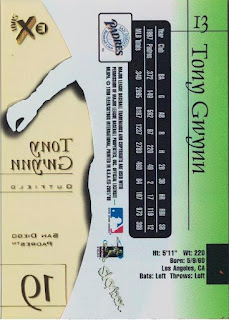 There is limited space to fit in a stats box, so they have gone for one season's worth of stats.

1999, the year when everyone referenced the end of the century... 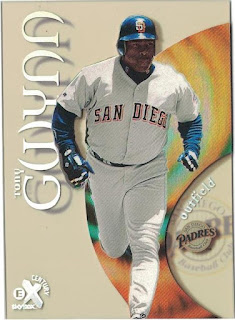 There were 120 acetate cards in this set. The clear bits on this card have also gone slightly yellow.  Fleer/Skybox used a similar font to the one used for Tony's name on this card on a few other ranges around about this time.
Again, because the back is see-through. the reversed out printed shape becomes an odd block. The one year stats line is bent on a curve to fit into the shape. 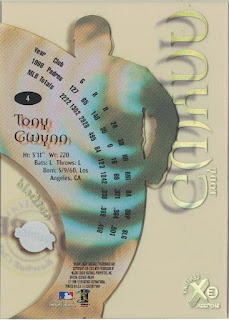 Card Number 809: Fleer E-X, 2000; #4
Tony was number 4 in this set for the second year running although this was now a Fleer range, not branded as Skybox. Fleer stopped using acetate for their E-X range and went for foiled shininess instead. The ribbon effect of the X in the background is pretty. 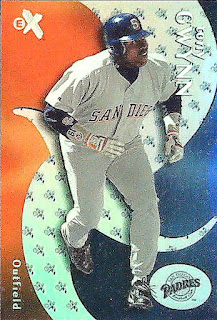 On the back they made it look like an acetate card by flipping the image of Tony complete with a mirrored San Diego across his chest. 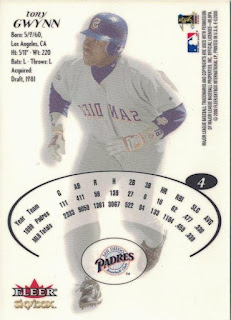 Even though there was no need to put the stats line on a fancy curve, Fleer went and did it anyway.
Total: 809 cards

Posted by Jongudmund at 8:13 AM