1996 was the mid-point of Tony's second career. He had an impressive start to his career in the 80s, winning the batting title in his second full season as the Padres went to their first ever World Series. He then had a couple of years where he was affected by injury before winning a trio of batting titles from 1987 to 1989. His form then dipped a bit in the early '90s. There are stories of problems with team-mates and at one point he apparently almost left San Diego.

However Tony re-emerged in the middle of the 1990s as a contact hitter without parallel, getting progressively more impressive towards the end of the century.

Taken like that, 1996 is about the middle of Tony's dominance of 1990s batting. It was also the peak of the overproduction era in the baseball card industry. There were more card companies producing more insert sets with more sales gimmicks than ever before. Happily the combination of Tony's peak performing years and the peak of the baseball card hobby means there are lots of cards from this time period for me to collect!
Card Number 790: Score Dugout Collection, 1996; #15
'Dugout Collection' were coloured parallels of a selection of Score's flagship set, in which Tony had card #464. These parallels appeared at a ratio of 1 in every 3 packs. 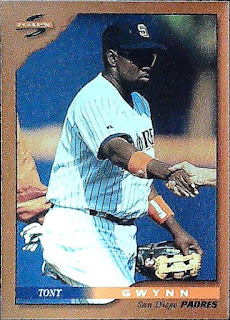 The card is a shiny bronze colour so I scanned it on the overhead which is why the picture looks a little grainy. The disembodied hand that Tony is shaking makes me smile. It makes the photo stand out.

The back has a watermark saying Dugout Collection 96. Tony has a neatly trimmed beard in the photo on the back. It was a very fashionable style for facial hair in the mid-90s. 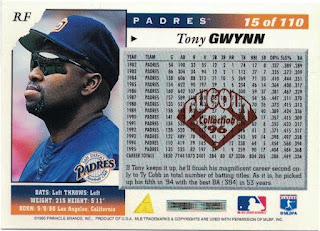 Card Number 791: Score Diamond Aces, 1996; #23
This is another insert series. These cards were only found in jumbo packs of cards and at a ratio of 1 in 8 packs. 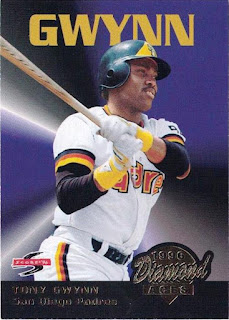 That cardfront is both very 90s and incredibly modern. It might be the font, it might be the timeless photo of Tony in a 1984 uniform, but I wouldn't be surprised if this was actually a Topps insert from the last couple of years. It's a cracking retro photo.

The back is an equal to the front in terms of looking like it could have been released much more recently instead of 25 years ago. 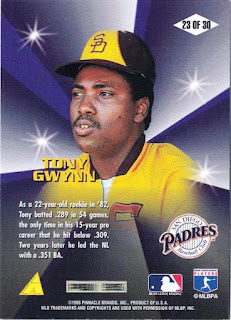 My only, very minor, criticism of this card is that I'm not sure that is a photo from Tony's rookie season which is mentioned in the little blurb. It's close though, with that old school yellow jacket.
Card Number 792: Score Gold Stars, 1996; #6
The Gold Stars insert cards appeared in Series 2 of Score's flasghip set at a rate of 1 in 15 packs. 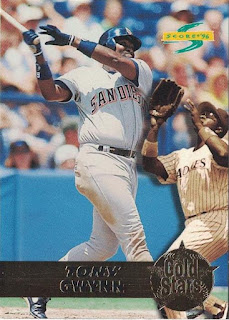 Two photos on the front with a sepia photo of Tony catching that is awkwardly juxtaposed with his backswing at the plate.

An 'underarm' use of the bat on the back! 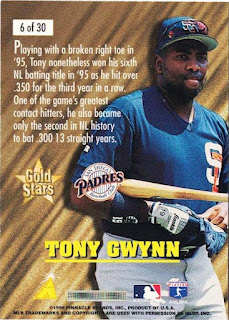 The cardback mentions Tony playing with a broken toe in the 1995 season. Somewhere there must be a list of all the injuries Tony suffered in his career. It seems like he was playing through pain more often than not.

Total: 792 cards - this is a bit of a milestone. The big Topps sets of the late 80s went up to 792 cards so I have literally blogged the equivalent of an entire Topps set now.

Posted by Jongudmund at 7:37 AM