Gawain got me some Ginter

A little padded envelope arrived on the weekend from Gawain. It was a set of this year's Padres cards in the Allen & Ginter retro range. Tony had a base card in the set and Gawain dropped in a bonus as well. 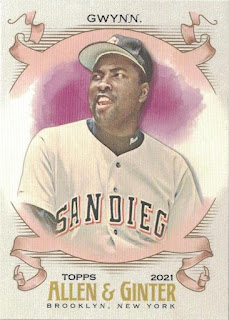 I doubt it's deliberate but the pink outline around the picture make it look a bit like Tony is trapped in a giant bubblegum bubble, particularly the wispy bits on the top and bottom.
I like the look of this card, even though the designer has clearly used the art filter to re-render the photo that Topps used on last year's Topps short print card. 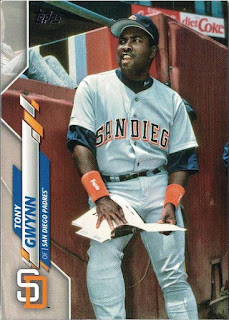 It was also on the back of this year's card in the Stadium Club range. 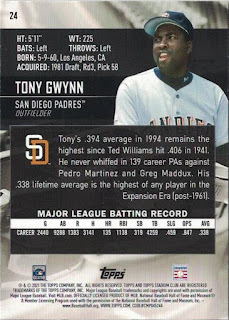 They obviously like this photo.
The back is, well, it's what Topps do with Allen & Ginter cards. It's tedious but they've been doing it for so long they aren't going to change. 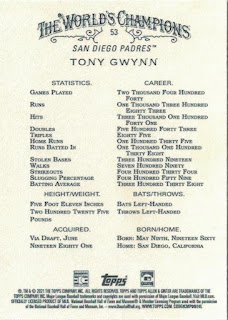 The bonus card that Gawain generously added in was the mini parallel! 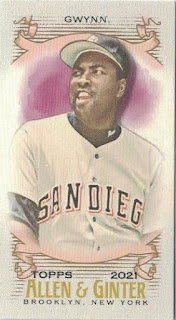 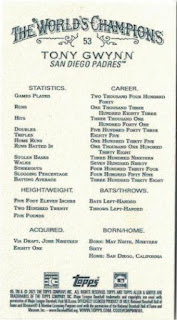 The cardback is just a scaled down version of what appears on the regular card. There are lots of different parallel versions of this card with different cardbacks that sort of replicate cigarette cardbacks of yore (except without any references to cigarettes).

The big news in the baseball card world this week is that Topps are likely to lose their exclusive monopoly to produce cards, with both the Player's Association and MLB signing deals with another company. While I have said for a while that I don't think the monopoly position was particularly helpful to the hobby as it meant Topps weren't being pushed to keep things fresh, I don't think the solution is to have a different company enjoying a monopoly position.

And the big news in my blogging world this week is that a large selection of cards might be incoming which will keep me posting well past the end of the baseball season and probably into next year! Until then, stay safe everyone and thank you for reading.

Back in black (foil)

Here's my third version of this year's Stadium Club card. Gawain sent it to me and we agreed that Topps are just getting really lazy with their parallels. 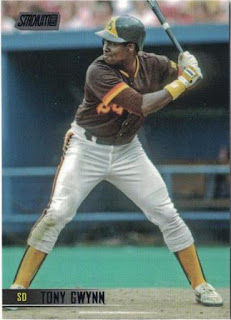 The logo and Tony's name are in black foil instead of silver or red.
Even though the back is exactly the same as the two other versions of this card, I scanned it so I could upload it to this blog. I think this means I have made as much effort, possibly more effort, than the set designers employed by Topps. 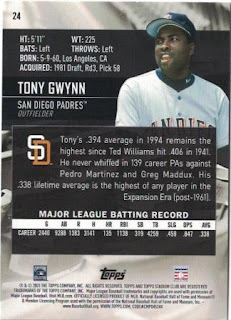 It's a nice card, and I am grateful to Gawain for sending me this version of it. But, come on Topps, this is easily the most boring way to produce parallel versions of cards. Maybe spend less time trying to sell glorified jpegs or more unending series of samey cards designed by 'artists' and put a bit of work in on the bread and butter stuff, eh?

So, my blogging of cards is slowing up. This is mainly because I don't have a stock of cards waiting to be blogged. Last year I literally had hundreds of scans and could batch write posts and then publish them on a daily schedule. I'm waiting on people getting in touch now or I have to actively go out and find cards.
And going out and finding cards isn't high on my priorities at the moment if I'm totally honest. In the last few weeks attending live soccer matches has been permitted for the first time since March 2020 and I have jumped on that train. I went to three matches in July, before the season had properly started, and I have already been to four games in August. That's my primary focus at the moment.
I even got offered a card last week that I turned down because, well, it was more than I wanted to pay for a brand new release and I've watched how prices of cards bubble up when a new product line is released, and then a few months later the bubble pops and a £5 card becomes a £1 card, or just gets chucked in a joblot. I literally thought to myself "Will I get £5 worth of joy from this card?" and decided that no, I wouldn't.
I'm not saying I'm bored of baseball cards or blogging. This has been, and continues to be, a really fun project and I still love my collection of Tony Gwynn cards. I'm not over Tony! Not by a long shot. But I recognise that my blogging has been very intermittent over the past couple of months and I just wanted to flag up that it may get worse at least until my need to watch soccer is sated slightly.
As ever, I just want to say a big thank you to the regular commenters. I do read all the comments and find them very encouraging. Take care of yourselves as the world opens up again!
Posted by Jongudmund at 9:41 PM 6 comments:

Sweetness (and a sour taste)

This was the card that tipped my hand into buying a recent joblot of cards from 2001, but I was very disappointed with it when I had it 'in hand'.

The Combos were a 20-card insert series featuring stars of the past and current big names. Tony was paired with Ted Williams, one of his heroes. 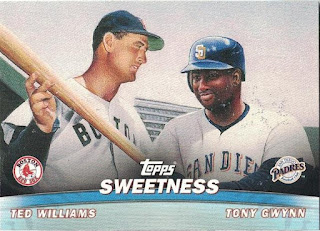 The photo composition is a little bit odd, but that's not what was disappointing about this card. There is some surface damage with a large area of speckling across Tony's face. I have a feeling this card is from some recently opened packs where the cards have stuck together over time. I have seen this a lot in pack-ripping videos where older packs are opened and cards get damaged as they are pulled apart.
The damage wasn't noticeable in the picture on eBay. I use my phone to look at eBay and that might be why I didn't see it. The damage wasn't mentioned in the listing description either, so it was very disappointing to only discover it when I opened the box of cards.
I messaged the seller, and received a small refund for this and the handful of other cards affected. But as this was the one card I really wanted from the lot, it's not really about the money.
Despite the damage (which is also visible on the back of the card, below), this is a nice concept for a card. The "Sweetness" refers to Tony and Ted's sweet swings as they batted their way to greatness. 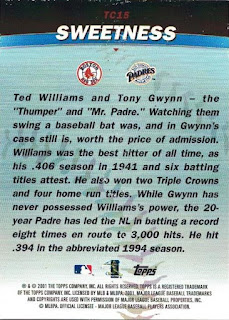 The state of this Sweetness card has left a sour taste in my mouth, and puts me off buying from that seller again. At the moment this is just a place-holder in my collection and hopefully I will find a nicer copy one day.
Total: 711 cards
Posted by Jongudmund at 7:49 AM 6 comments:

This cameo card was a bonus in the recent joblot of cards I bought off eBay. I knew there were two ProFiles cards in the lot and I banked on at least one of them being one of the ones where Tony offered an opinion on another player.

There were 20 cards in this insert series. This card features Jeff Bagwell. I blogged about another card from the series back in June. 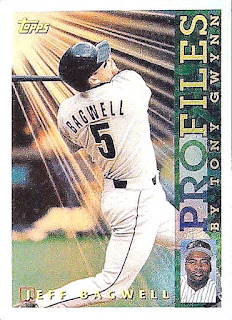 It's super-shiny, so I used the overhead scanner. There wasn't enough light in the room so I tinkered with some settings and the resulting scan is a bit grainy. But you can get the idea.
So, what did Tony think about Jeff Bagwell...? 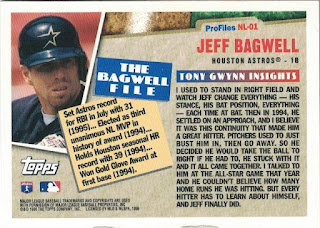 One thing that I've noticed with Tony's take on hitting is that he always used to say that a hitter needed to find their stance, swing, rhythm and then stick with it - here he talks about Jeff finding continuity. Except of course, Tony was happy to change things in his own batting. That's how he earned the nickname 'Captain Video' in the early stage of his career, because his wife, Alicia, would tape his games and he would watch and re-watch his at bats to see what he could have done differently. He also changed his preferred bat on the advice of Ted Williams in the early 90s, setting him up for his four latter batting titles.
So, there was continuity, and also scope for change. Which is kind of what he says here about Jeff's approach to hitting.
And, speaking of Ted Williams, there's a card tomorrow featuring him.
Total: 710 cards
Posted by Jongudmund at 6:57 AM 2 comments:

I have recently been away on a holiday with family. I had a box of cards waiting for me on my return - two eBay purchases of cards from 1996 and 2001. I only saw a handful of cards on the listing, but both sample pictures had a Tony Gwynn card in, so I decided to risk it. Unfortunately the rest of the lots were very light on the Gwynns.

Still, at least it gave me something to share, including this shiny card from Topps's most mysterious range.

The number 'M9' comes from Trading Card Database. It's hard to work the number out from the actual card. 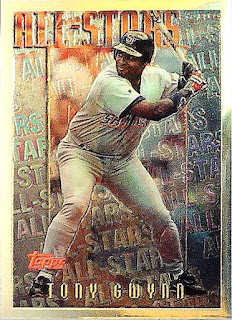 It's a super shiny card so I stuck it under the overhead scanner. It's a bit more silver in real life.

On the back we get some "Mystery Facts" and you have to guess who the player is who is being described. M9 is really easy as it's the picture on the front of the card. 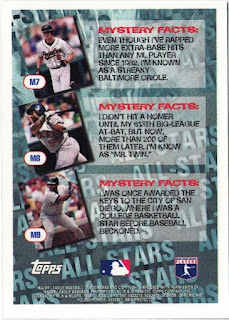 The way these mystery facts are presented made me check something. This same card back appeared on M7 and M8 on the set as well, which would make them "cameo cards". According to BaseballCardPedia, these cards were found in Series 1 of Topps's flagship set in 1996 and came with a black film over the top that had to be peeled to reveal the mystery player. That makes this the mid-90s version of a "Rip card" except the card doesn't get ruined in the process.
Speaking of cameo cards, that's what will be coming along tomorrow.
Total: 709 cards