Another trio of cards from 1996 today. 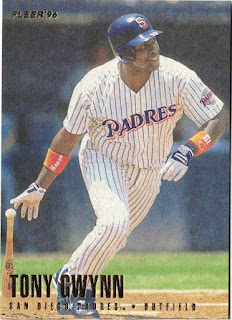 For a couple of years Fleer printed their cards as full-bleed photos on unvarnished matt card stock. It's an unusual look for cards released in the 90s, as most card companies issued glossy cards. Tony's name and position are picked ou tin gold foil.
The cardback includes an almost complete career stats box. They only had room for 12 rows so omitted Tony's statistics from 1982 and 1983. Tony looks a bit startled in the photo. 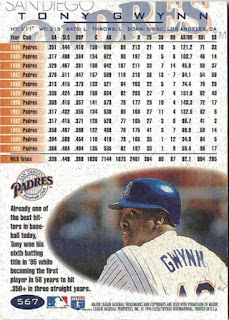 As a reflection of what I posted yesterday about Tony's second career peak, the factoid is about how in 1995 he became the first player to record a batting average over .350 for three years running since the second world war. Tony's batting average in the last ten years of his career was a good wedge higher than in the first ten years. He hit over .350 in 1996 and in 1997 as well.
Card Number 794: Fleer Update, 1996; U224
Encore was a subset towards the end of the Update set, featuring the bigger stars of the game. 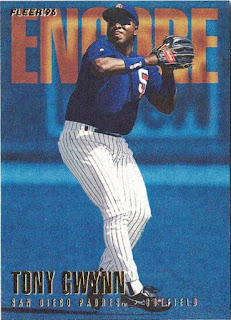 This card is printed in the same way as the flagship set, but with a bold blue tint in the background.
The cardback has the same stats box, but a different photo and factoid. 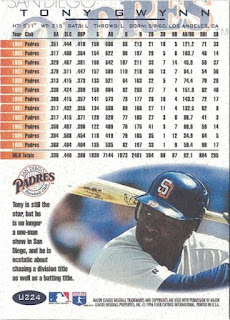 We will have to take Fleer's factoid writer's word for it that Tony was ecstatic about chasing a division title, as he looks focused on hitting the ball in the photo. However, it's on record that Tony was ecstatic about the Padres winning the NL West that season - especially as his brother Chris hit a 2-RBI double in the eleventh inning of the final game of the regular season, which meant the Padres won the Division. It was a winner takes all game against the Dodgers at Dodger Stadium as the Padres pipped them to first place.

There were 10 cards in this insert set. (Which makes me think of Mad Max 2!) 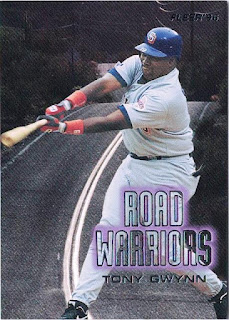 As I mentioned when I blogged about the Pinnacle cards with Tony's home and road stats on, it didn't seem to make much difference where Tony was playing. He hit the ball in every park. The same wasn't true about stealing bases, though. 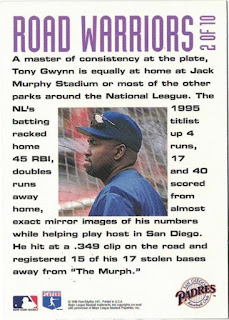 Although the purple font for the title is attractive, I'm dinging a point off this card for having an awkward lay out for the text on the back.

Posted by Jongudmund at 7:59 AM