One Card Only - a fifth magic moment

Topps released five versions of card #240 in their flagship set in 2000. Dubbed 'magic moments', the variations had a foil print over the top and different cardbacks. I had accumulated four of them, but thanks to the recent influx of cards, I can now blog the fifth one in the micro-set. (Here are three, plus an Opening Day parallel; and here's a fourth!) 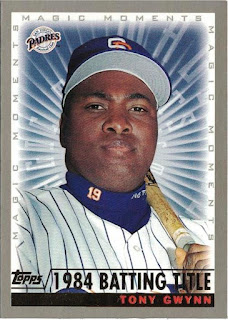 The front is the same as the other versions of the card, apart from the foil stamp across the bottom.
The back is different, talking about Tony's first full Major League season in 1984. 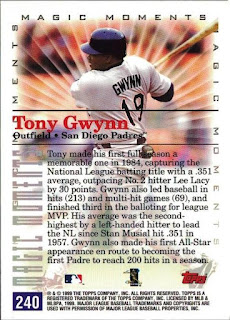 Winning the batting title and the other statistics are all impressive achievements, but the omission of Tony appearing in the World Series with the Padres feel odd. It was the first World Series in franchise history and yet it's not mentioned. However, another version of this card is all about winning the National League in 1984 so it wasn't completely ignored.
The complete list of 'Magic Moments' in this set are:
The 3000th Hit card is the one that also appears in the Opening Day set. Tony's modern-day record batting average of .394 in 1994 is mentioned on the 1995 Batting Title card, but didn't merit being a 'Magic Moment' in its own right, according to Topps.
Having this card means another 'gap' has been filled in the collection (and my Topps binder) and another small 'set' has been ticked off. Which makes it a bit of a magic moment for me, too.
Tomorrow marks a special milestone on the blog and I'm going to be celebrating it with a special card!
Total: 758 cards