Cards that look the same at first glance, the Topps 2000 edition. This time it's not because of a reissue saying Topps 2000. These were all cards issued in 2000 as part of a 'Magic Moments' subset, with overprinting of Tony's achievements on the front.

As it's the anniversary of Tony's untimely passing today, it seems fitting to be recounting his achievements in this post. 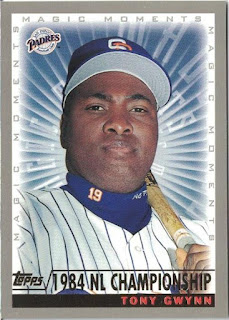 The back records how it was Tony's double in the seventh inning of the deciding Championship game that took the Padres to the World Series. 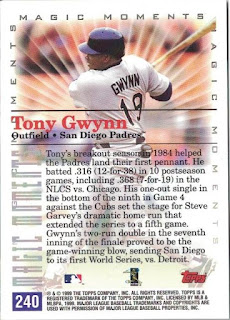 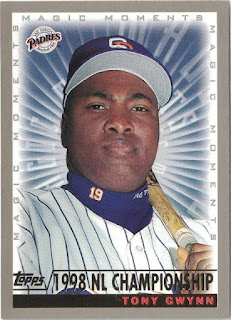 Even though the back has the same number and design, the blurb is all about the 1998 Pennant, and how Tony hit a home run at Yankee Stadium during the World Series. 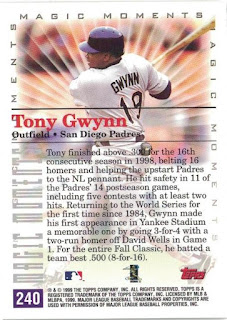 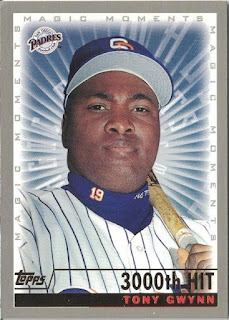 The back names the pitcher who pitched the pitch that he hit for #3000 - Expos rookie Dan Smith. I'm going to have to try and find one of his cards now. 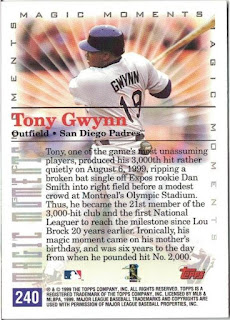 Trading Card Database logs five variations of this card, so there is another set of "twins" out there - those cards denote his 1984 batting title (his first) and his 1995 batting title, the season after he posted his average of .394. It seems odd not to have a card for the .394 season, but that was a foreshortened season because of the player's strike.

Eagle-eyed readers would have noticed there were three cards in this post about twins. Should I have called them triplets? Well, no, because I have a 4th card here to make a second set of twins and round out the post. 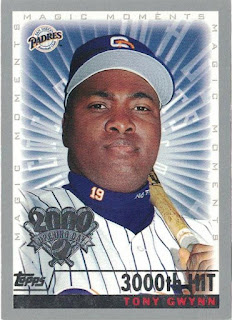 Same cardback as the regular flagship release, except for a different card number. 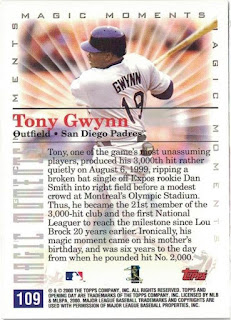 The "3000th Hit" overprint was the only "Magic Moments" card featuring Tony in the Opening Day release. So at least I don't have to go tracking any more down from this release. (I still have a gap in my collection for the Opening Day version of Tony's base card, though.)