In 2000, Topps included some 'Magic Moments' cards in their flagship set. They were issued with overprints commemorating various things. I blogged about three of the cards, and an Opening Day version, back in June.
There are five different overprints in this set, and I have recently added a fourth version of this card to my collection.
Card Number 548: Topps, 2000; #240 (1995 Batting Title) 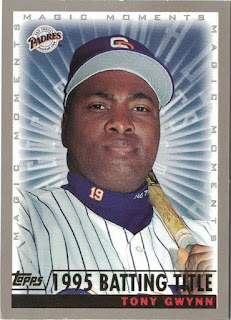 The cardback explains why Topps picked the 1995 batting title as the one to highlight on this card. 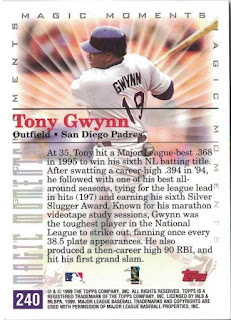 Putting all four cards together makes a nice display. 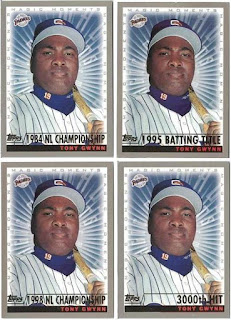 The 3000th hit card was included in the Topps Opening Day set in 2000. There is a fifth overprint still to get as well. So, Topps really made the most of this photograph in 2000. However, that wasn't the first time Topps had used this photo. It also appeared on the back of a Bowman Chrome card in 1999. 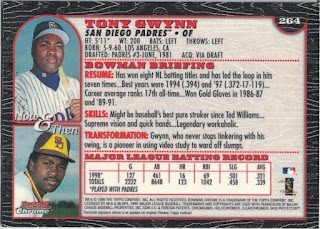 This takes this photo up to 7 appearances on baseball cards across 3 sets, which is reasonably impressive for a time before the current era of multiple parallels.
Total: 548 cards
Posted by Jongudmund at 9:54 AM