I've noted before how turquoise was an on trend colour back in 1992 and 1993. (Of course back then it would have been trendy rather than 'on trend', but anyway...) Both Fleer and DonRuss used turquoise as a colour theme in their 1992 sets, while Topps, ever the trend-follower, daubed it onto their Black Gold card in 1993.

I have been working my way through a large selection of cards from Gawain, and as I went through them I found two more cards from the turquoise era. The first was a Fleer card from a promo set. It was probably produced, and given away, in the thousands, but there's always a slight thrill when a card you haven't seen before pops up in a lot. 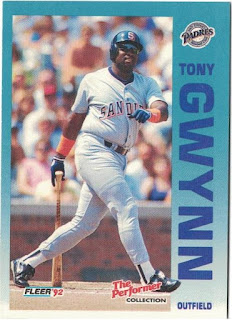 This card was given away at 7-Elevens and Citgo petrol stations. According to Beckett, if you bought 8 gallons of petrol, you got given a pack of 5 cards.

Although Beckett reckons the normal Fleer cards that year were green, not turquoise, both of them look turquoise to me, albeit the Performer cards are a slightly different shade. (Now it is possible that my Fleer base card has faded from green to turquoise, but if that is what's happened, so have all the other Fleer 1992 base cards I've got for other players.)

Because it's a promotional card there are a couple of extra logos on the back alongside MLB and the MLBPA. I'm going to stick my neck out and say that's a turquoise band across the middle as well. 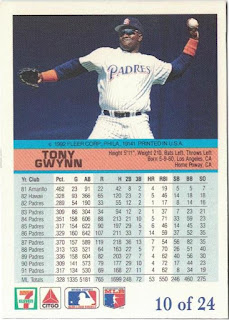 When I was a kid, we had a family holiday in America. Along with that being the first time I bought baseball cards, there are a few other things that really stuck in my memory. The fluffiness of American doughnuts. Breakfast in the hotel when people had bacon and sausage patties and scrambled eggs with pancakes and syrup all on the same plate! I remember going in a 7-Eleven as a petrol station. It was easily the size of a small supermarket back home. I was simply amazed that they would sell coffee by the litre. From a machine. In a petrol station. 24 hours a day.

To be honest, I was less fussed with Walt Disney World than I was with the hotel buffet breakfasts and shops like 7-Eleven. The Magic Kingdom had a castle, big whoop. The town I grew up in had a castle, and ours was 900 years old.

I know this makes me sound like a total rube, but America was this oddly familiar, yet utterly alien place. Nothing seemed to make sense. I loved it, of course, the way an eleven year-old would love a place where all the rules got ripped up. (Doughnuts for breakfast, what paradise was this? Gum in with your trading cards? What?) 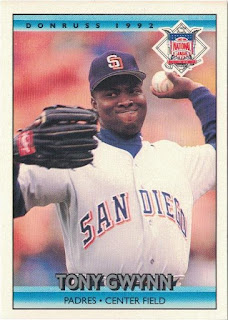 The second Tony Gwynn card from the DonRuss 1992 set is another card I hadn't encountered before. I love the look on his face here. It's unconscious concentration on throwing that ball as hard and accurately as he can. It's an All Star Card, and they decided to place the National League logo just where it will get in the way of the photo, instead of in the big gap on the other side of the card.

The regular DonRuss cards had turquoise tints on the back too. There's none to be seen here. Orange was also an in colour around about then. 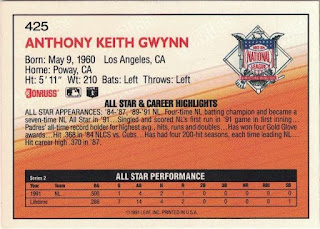 The first few card factoids are all related to Tony's All Star performances, including in the 1991 All Star Game in Toronto. So far on this blog I have shown three other cards that reference that particular All-Star game - from Upper Deck, Score and Topps Stadium Club. This is a more generic 'All Star' card, but still, I think the 1991 All Star Game might have been the All Star Game that Tony had the most cards released about. That's probably fitting because he got 2 hits for a .500 batting average.

If some more turquoise tints tip up, I will let you know.