Today's post will take us up to 200 cards on the blog. Two whole centuries! So what better than to show two cards about the 20th Century's Best? 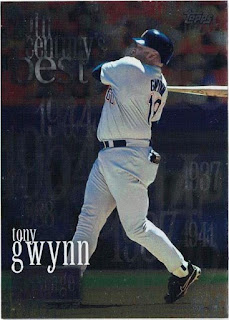 It's hard to read, but in the little box on the front, it says 'average'.

On the back, it lists Tony as the leader in batting averages among active players. He doesn't make it onto the all-time top ten list though. He is joint 16th on the all-time list, according to ESPN. 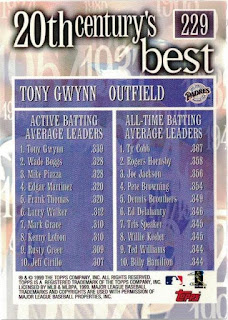 It is always difficult comparing players from different eras, though. It's the same in any sport. Equipment changes. Rules change. Ballparks change. Substances are banned.

In He Left His Heart in San Diego, Michael Schell repeats his claims made in 1999 that Tony was the greatest hitter in the history of Major League Baseball. Schell adjusted the hitting rates for all time, comparing the first 8,000 at bats for all players, and on that basis proclaims Tony to be the best ever. He also notes that strike out rates have risen immensely since players like Ty Cobb and Ted Williams were playing, and that Tony's strike out rate was unusually low. (Schell's section in the book is from page 135 onwards.)

Card Number 200: Topps, 2000; #468
Another shiny card. One day someone will invent a scanner that works on shiny trading cards. I will buy one! 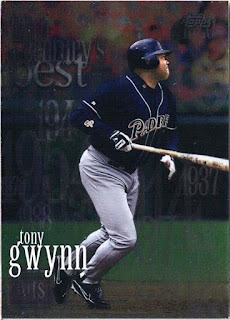 This card is about hits. Tony was the leading active hitter at the end of the 20th Century. Again, he didn't feature on the all-time top ten. 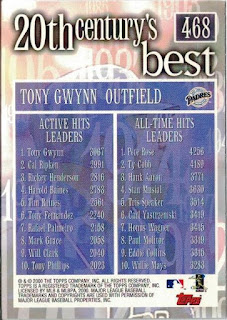 There was a conversation on Facebook recently about which records will never be broken. I think it's Pete Rose's hits total. A player would have to make 213 hits a season for 20 seasons to break it. Even Tony was 1,000 behind Pete Rose's total when he retired.

Despite not being in the all-time top tens, there's no doubt Tony was one of the best players of the 20th Century. If Michael Schell is right, had he been born 25 years earlier and started playing in the 1950s, he could well have been the greatest batter ever, without needing to have his figures adjusted to take into account changes in the game.