One card only - on the Dream Team 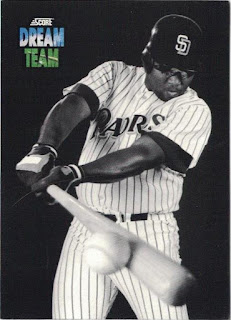 That's a great posed photo, even if the baseball is clearly glued to the bat! 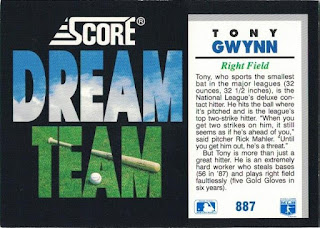 The back mentions that Tony wielded the smallest bat among active Major League players. Although 1992 is around about when Ted Williams insulted his bat saying it was the sort of thing you'd use to pick your teeth. Tony started using a bigger bat and bagged four batting titles in a row starting in 1993. The cardback also talks about Tony's propensity for stealing bases and his fielding awards, but those aspects of his play became less important during the middle era of his career. He picked up his last gold glove in 1991 and the base-stealing dried up with only 11 steals after 1997.