A sort of theme today along the lines of 'treasure'.

Card Number 109: Upper Deck Black Diamond Rookie Edition, 2000; #76
Metallic red card front with a picture of Tony jogging. To be fair, with the knee injury he carried throughout that season it's pretty impressive he could get to even this level of speed. The card background is  turn-of-the-millennium cyber-noir glitchiness. 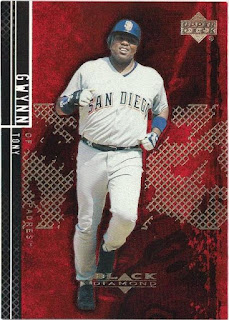 Although this is a set recorded on TCDb  as released in 2000, it includes Tony's stats for the 2000 season. It also notes that in 2000, Tony was the leading active player in hits, with over 3,100 hits by that point. 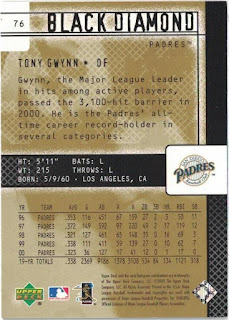 From Black Diamonds to Black Gold... 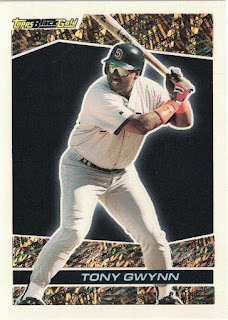 He seems to be straddling the bar with his name on.

This is the card back. 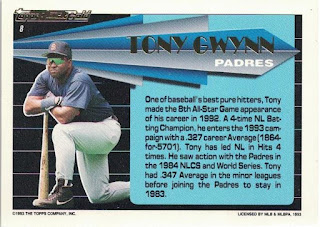 It looks to me like some kind of 3D sword motif. Really odd. But I do like the photo of Tony on one knee leaning on his bat. Combined with the weird sword it looks like he's being knighted. Also that is a stunning shade of turquoise on the back there (much bolder than the shade Fleer used in 1992). I hope I'm not alone in saying the card hobby needs more turquoise!

It's interesting reading these snapshots of Tony's career "halfway through". He actually improved his career batting average in the second half of his career to finish with .338. At the start of the 1993 season he only had 4 batting titles and hadn't won one since 1989. It's doubtful anyone realised how much he would dominate the batting charts for the rest of the nineties.