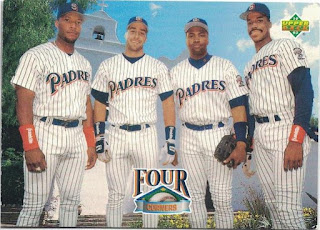 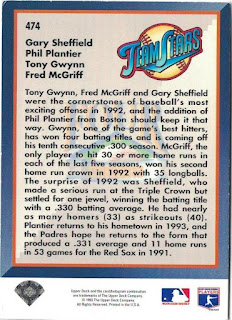 You would expect players with these pedigrees to put the Padres out of sight in their division. Gary Sheffield and Fred McGriff are the only two players to hit more than 30 home runs in a season for 5 different teams. (Fred is also the player with the highest number of home runs - 493 - not to have been inducted in the Hall of Fame!) Gary Sheffield's batting title in 1992 means he is the only San Diego Padre apart from Tony to become a batting champion.
However by the middle of the 1993 season the four players pictured on this card were no longer team-mates. In the summer Fred McGriff was traded to the Atlanta Braves, and Gary Sheffield went to the Florida Marlins (as they were called then) where a few years later he was a World Series winner. Gary's subsequent lengthy career across both the National League and American League means he holds the record for the most ballparks played in (51). He eventually retired after a final season in 2010.
Phil Plantier was still a Padre at the end of the season, recording career highs in RBI and home runs. However he was traded at the end of the 1994 season, with Padres legend, the late Ken Caminiti travelling the other way from the Houston Astros. Plantier returned to the Padres twice more during his short career for a couple of half-season stints before being the first of the players featured on this card to retire, at the end of the 1998 season.
All baseball cards capture a moment in time. This card reflects a brief window when the Padres boasted what was on paper one of the most powerful batting line-ups in their history. A few months into the season and and this card was already an artifact of a team that had gone its separate ways.
Total: 225/394
Posted by Jongudmund at 9:17 AM