Following on from yesterday's post which featured a card from Upper Deck in 1993, here are 3 more cards from the same year, and the same card company!
Card Number 226: Upper Deck Fun Pack, 1993; #138
In the early 90s most of the card companies put out sets aimed at kids. Topps called their range Topps Kids, DonRuss/Leaf had Triple Play, and Upper Deck released the Fun Pack, with 225 cards to collect, jazzy stickers, scratch off cards and even cards featuring mascots! The "Stars of Tomorrow" were rookies in a zodiac style constellation and there was a subset with photos of top stars from their childhood. (Most of them look adorable!)
Compared to those cards, Tony's is quite plain. 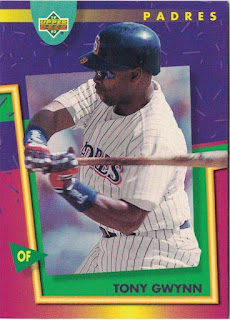 Well it's plain on the front! On the back there's a cartoon! 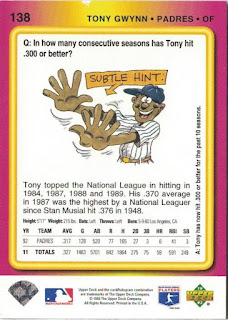 It's not a funny cartoon, but I'm all for cartoons on cardbacks! Back in 1993 his best hitting average was .370 and that's the one that's gets mentioned here.
Card Number 227: Upper Deck, 1993; D-14
Meanwhile in the main Upper Deck range, Tony had a card in the "On Deck" subset. 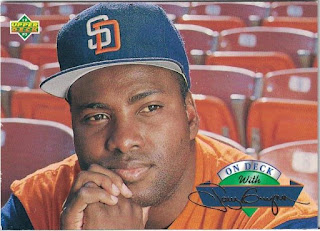 This is a bit like a Studio card, or one of the early Stadium Club cards.
The cardback is a bit different. 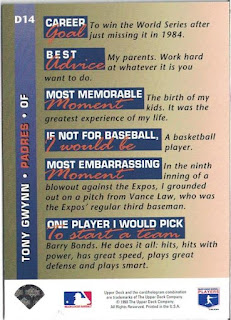 I like this idea for a cardback. It reminds me a lot of the player profiles that used to be a staple of soccer programmes when I was a kid. It's always interesting finding out what players like, dislike, treasure and regret. Even though nowadays we have much closer access to players through social media accounts and stuff, more cardbacks should be like this instead of yet another stats box.
Looking at this now, 27 years later, Tony came close to that career goal in 1998, but never made it. He probably would have been a basketball player if he hadn't been drafted in baseball. Who knows how that would have gone if he had accepted the draft offer from the Clippers? I'd actually read about that most embarrassing moment before, so that must have really haunted him.
Tony really admired Barry Bonds. One of the contributors to He Left His Heart in San Diego said that Tony actively laid out Barry Bonds's credentials for induction in the Hall of Fame after Bonds retired, despite the steroid scandal that tainted the end of Bonds's career.
Card Number 228: Upper Deck Fun Pack, 1993; #221 (All Star Advice subset)
And back to the Fun Pack range!
Want to swing like Tony Gwynn? Here's a scientific explanation for why he made all those hits. 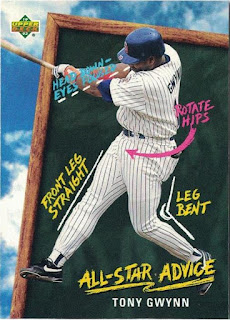 The back breaks down the mechanics of his swing. 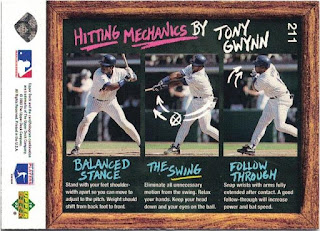 This is another cardback I find really interesting. It's unique in my collection so far, and I would like to see more cardbacks that look like this.
Upper Deck also released their Fun Pack range in 1994 but like other companies the 'kids' ranges faded a bit. Still, at least this brief flurry by Upper Deck into segmenting the market gave me some fun cards to show on my blog.
Total: 228/394
Posted by Jongudmund at 9:14 AM