A few posts back I included a couple of cards from Topps's Stadium Club range and realised I hadn't yet blogged about any Stadium Club cards. So to rectify that, I'm going to post some over the next few posts.

Stadium Club was Topps's premium product in the early 90s, produced to compete with Upper Deck. From the outset the cards featured 'full bleed' imagery, in other words, they didn't have borders. They also tried to use better, more innovative photography, and had jazzier card backs.

Card Number 151: Topps Stadium Club, 1991; #308
This shows off the best of Stadium Club's very first set. A close up, high resolution, photo that is in focus and captures the subject in a way that makes them look good. In other words, it's the opposite of the kind of photos Topps used on their regular flagship products at the time. 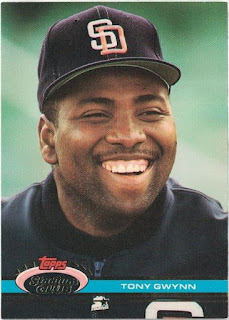 Perhaps to highlight my point about Topps photography they used a picture of Tony's rookie card on the reverse, where the main focus of the picture is Tony's bottom. 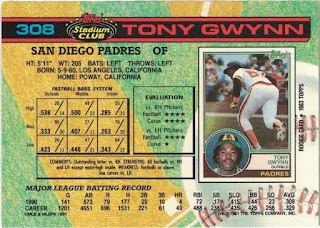 I have a theory Topps included rookie cards to remind everyone that they were the company with the history in the baseball card world, unlike those upstarts Upper Deck. (I've only just noticed he's not wearing number 19 on that uniform. Whoah!)

Topps also tried to provide some more in depth 'analysis' on the back, dividing up Tony's hitting averages on fastball pitches and identifying strengths and weaknesses. I don't think that would be much use to the average baseball card collector, but it may have informed some discussion among pitching staff. "Pitch it at waist height on the inside!"

Card Number 152: Topps Stadium Club, 1992; #825
Another iconic photo. I particularly like how the photographer is reflected in Tony's Oakleys. 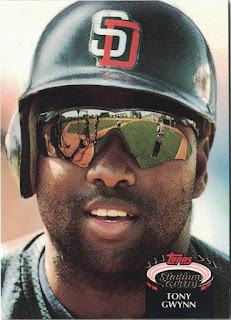 The cardback is very similar to the previous year, including the rookie card. 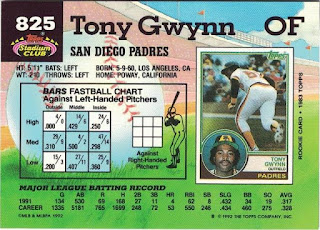 Again, the analysis is about how well Tony fared against fastballs, although they have limited this to batting against left-handed pitchers. The square for right-handed pictures is confusingly left blank. I'm certain he hit a few.

There was a special issue of Stadium Club in 1992 called Stadium Club Dome. It was mainly rookie cards, draft picks and the players selected for the All Star Game in 1991, which was held in Toronto. 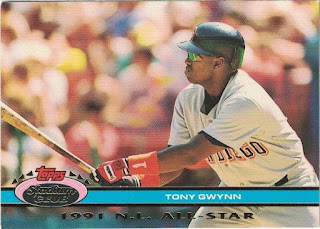 The back includes the logo for the All Star Game in Toronto. There was a fashion in the early 90s for cards devoted to the All Star Games - Tony had an Upper Deck card from the Toronto game as well, but they had stolen a march on Topps and released it at the tail end of the 1991 season. 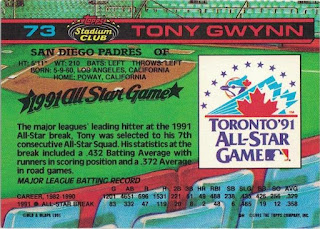 The statistics on the back explain why Tony was selected for his seventh consecutive All Star squad in 1991. His good form continued as he got two hits in the game, although he ended up on the losing side. 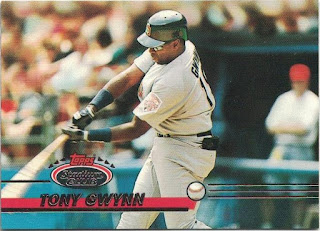 This was the last year of the oval Stadium club logo. Nineties design was starting to creep in, with the little ball element whizzing in from behind Tony on the card.

The cardback includes a photo with very crisp Padres pinstripes. The rookie card makes its final appearance on a Stadium Club cardback. 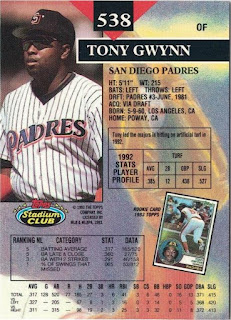 The stats on the back have grown more eclectic. Tony's hitting average when playing on artificial turf was high. His percentage of missed swings was incredibly low, getting down towards 1 in 20. (That's actually quite incredible, almost 19 times in 20 swings he connected with the ball.)

Card Number 155: Topps Stadium Club, 1994; #151 (Gold Parallel)
The foil bit under 'Gwynn' marks this out as a parallel. I actually didn't realise this until I came to write this blog post. That's another ordinary base card to chase down. 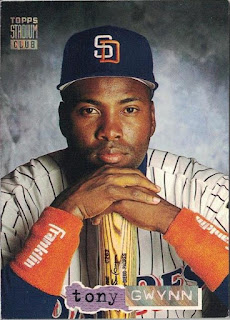 I think this is a great photo, reminiscent of the best of the Studio cards. Tony has a no nonsense expression. He looks serious, but not stern. Also, that's his name on the bat he's holding. Product placement!

To be a proper Nineties cardback, a card needs a mix of fonts, all in different colours, odd kerning, design elements dropped all over each other, and as many licensing logos as possible. There are at least six fonts crammed onto the cardboard rectangle here. 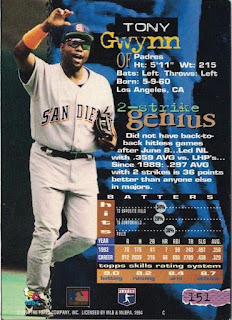 The little batting graphic is supposed to illustrate which areas of the field Tony was most likely to hit the ball towards. He was remarkably consistent, according to this, as he sprayed the ball in every direction about equal amounts of time. 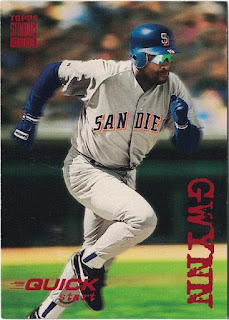 The blur effect makes this card look cool. And a bit like the overly airbrushed monstrosities being issued today. 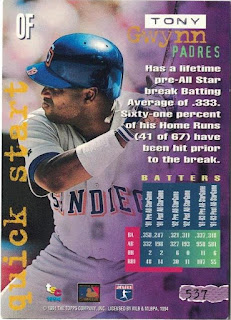 From what I can work out, the players in the Quick Start series all had a tendency to start the season well and then tail off. In Tony's case that usually because his injuries started to mount up. One of the contributors to He Left His Heart in San Diego reckoned that if Tony hadn't played the final few weeks of the season for most of the seasons his overall batting average would have been higher and he would have won more titles. But Tony wasn't that kind of player. He wanted to go out and play even if his form was tailing off.

There are more cards from the Stadium Club to come over the next few days.