Let's take a break from forgotten Fleer card ranges, and go back a quarter of a century to the heyday of the baseball card hobby - 1995. Here are five cards that reflect the choice and variety available to card collectors in the middle of the last decade of the twentieth century. 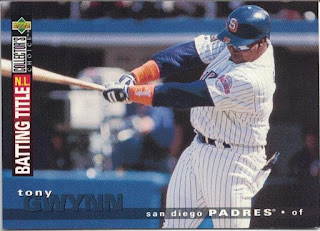 This card commemorates Tony's national league batting title in 1995, when he achieved a .367 average and was actually the overall batting champion across both leagues. It's a landscape card so it really shows the extension of Tony's swing.

The cardback has an unusual photo. 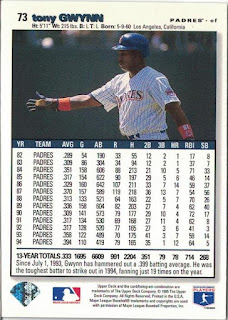 Also, Upper Deck really wanted to show how close he got to .400. They calculated his batting average from July 1993 through the whole 1994 season and worked it out at .399. A whisker away! 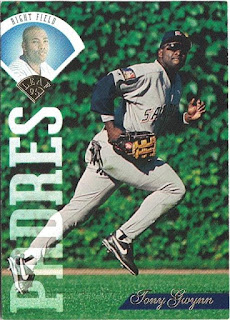 Leaf was a premium product in 1995. Check out that handwriting style font for his name. This is a very green card, with the foliage in the background presumably being the ivy at Wrigley Field. It's nice to see a photo of Tony in the outfield. But just in case you were missing a photo of him at the plate, Leaf put one on the cardback. 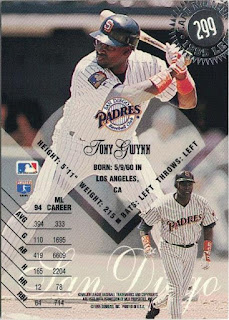 Leaf tended to put some effort into their cardbacks from 1993 onwards. This one is a little bit cluttered. The stats are nice and contained though, and very easy on the eye.

Also with the portrait on the front and two pictures on the back, this is a four-photo card. 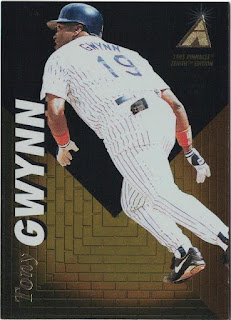 It's also that mid-90s style of a complete cut-out of the player dropped onto a random background.

I have no problem with card companies experimenting with different ways to show player stats. Which is just as well... 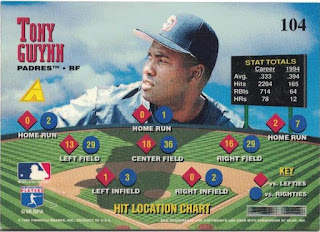 If you ever wondered where Tony placed his hits, this tells you. He scored 12 home runs and almost all of them went over the right field fence. His hitting is very consistent, with a large number going straight down the middle. More card companies should put relevant numbers on pretend scoreboards like Pinnacle do here. And Tony looms over all these graphics like a colossus.

(Yes. This is one of my favourite cardbacks ever.) 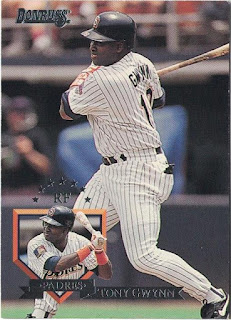 Not every card range can be a classic. DonRuss are trying hard here, but this is average. The inset photo is nicely done with the home plate outline looking like the shield on a coat of arms. But that's the best bit. 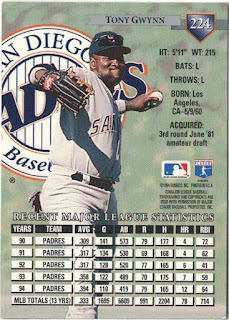 The back has Tony really winding that arm back ready to throw. He seems to have a large wad of tobacco in his cheek as well. The stats box only covers the previous five seasons. It's that sort of half-hearted attempt that really defines this card. 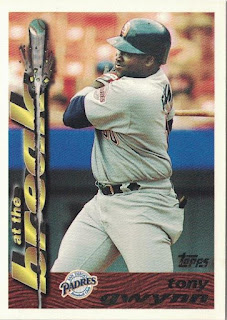 The 'At the Break', cards summarised how players had been playing before the All Star Break. Tony gets described as "totally torrid". 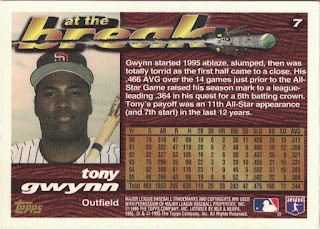 "Torrid" has a different connotation in America, where it seems to just mean 'hot'. In the UK, a 'torrid time' is difficult, usually because of successive misfortunes. It's not an adjective we would use to describe a person. So, it jars me reading it as a description here.

Anyway, he was on a hot streak. The same can't really be said for Topps with this card design. At first glance I thought this was a Pacific card with the ball exploding from the big logo like that. But it's not. It's most definitely Topps. Being charitable, it's something different and adds a bit of variety to the selection of cards from 1995.