The baseball season has started and teams had a weird shortened pre-season of exhibition matches. Today's blog post hails a happier time when Spring Training meant training in the Spring ready for baseball to start in April. 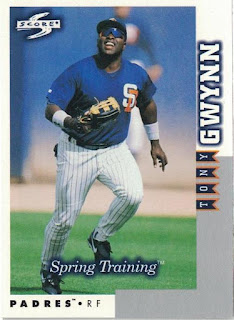 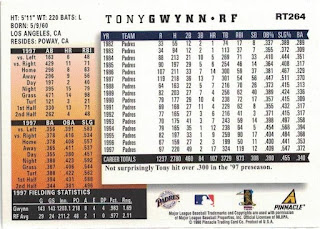 This is from the time when Score was being touted as a Pinnacle brand, and just before Pinnacle went bust. (More on the history of Pinnacle here.) 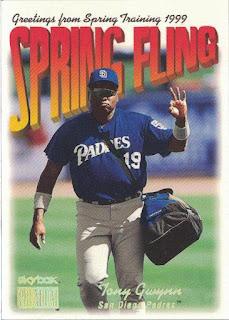 That's a cool photo on the front. Everything is OK! I'd love to know what was in that kitbag. And, also why didn't Tony have someone to carry his kitbag for him?

And now a serious contender for oddest cardback in the collection. 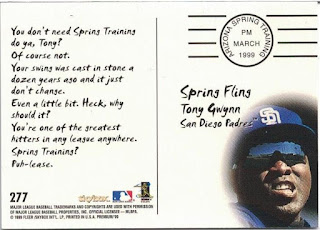 A pretend postcard to Tony telling him he didn't need Spring Training. As an on-off philatelist as well, I like the fake postmark, even if the message is a bit cringeworthy. 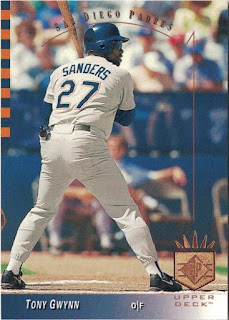 Why does it say Sanders on his jersey?

All is explained on the cardback. 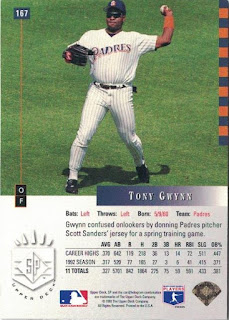 He was fooling around during Spring Training and put on pitcher Scott Sanders's jersey. As you do. Maybe it was an early April Fool.

So who was Scott Sanders? It wasn't a name I recognised as I was putting this post together. Then in a quirk of fate a package of Padres cards arrived last Friday and in among them was Scott Sanders's Fleer Ultra rookie card from 1993. 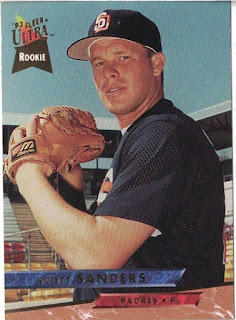 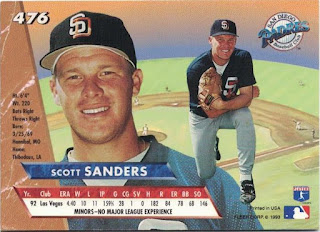 Scott went on to have a seven year career in the major leagues, giving up 674 hits in 681 innings pitched for the Padres, Mariners, Tigers and Cubs. Those aren't stellar figures but at least he has the honour of being one of a handful of other baseball players besides Tony to appear on this blog!

I went looking to see what the SP means in the SP brand from Upper Deck and it turns out it doesn't mean anything. Still, it's gave me a fun little card to round of this Monday Mixer. Let's hope next Spring Training happens as normal!

Posted by Jongudmund at 7:04 AM