Forgotten Fleer 2 - around about the mid-90s

Circa is an odd name for a card range. But for three years in the mid-90s, Fleer used the name for some reasonably large sets (200, 400 and 300 cards respectively). This was while Fleer was owned by the Marvel Entertainment Group, which was struggling to deal with a bankruptcy situation. Looking at the cards, they have a comic book vibe to them.

Card Number 179: Fleer Circa, 1996; #186
This card is one of the earliest to completely cut the player from the photo background. 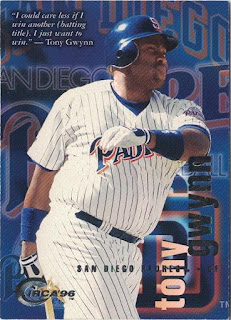 One thing Circa cards have that's a bit different is a quote from the player quote on the front. Tony sounds blase about batting titles, but he had another two coming his way yet.

The designers do exactly the same thing with the photo on the back. The shadow underneath him is most likely photoshopped. 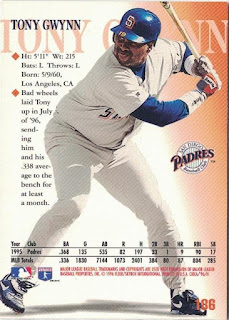 I've not seen a knee injury referred to as "bad wheels" before. Also, surely they knew how long he was out injured. But then I guess this is "circa" so it's natural for them to be imprecise and say "about a month". 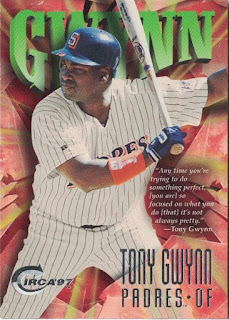 For the second year they had a quote on the front from Tony. I admire their commitment to accuracy by putting brackets in the quote, although it feels unnecessary. 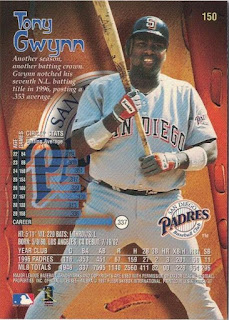 They mention Tony's seventh batting title on the back of the card. He would go on and add his eighth title this season. They've also added "Circa Stats" that contrast Tony's batting average per season with how old he was. It makes no sense to me because some of the bars on the graph are for higher figures than the career total at the bottom, yet are shorter. It also doesn't include his entire career because it only goes up to when he was 29 and he would have been 36 when this was printed.

That would be a niche baseball card blog - cardback stats that make no sense at all.

Card Number 181: Fleer Circa Thunder, 1998; #250
The range had a name change for its final year and the word "Thunder" was added giving the card a tacky logo. 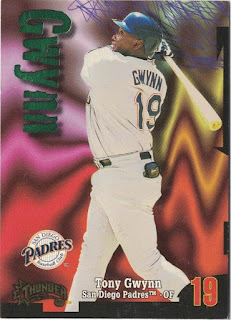 The same design principle was at work: a cut out of Tony dropped onto vibrant colours. The scribble at the top of the card is part of the printed design. It's not that someone went mad with a pen.

The back has another photoshopped shadow. 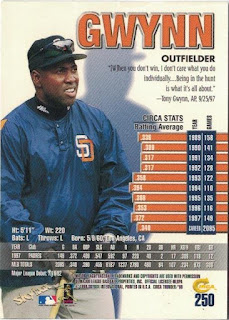 The quote has moved to the back, and this time it's got a full citation to boot. It's been edited, hence the ellipses, and that has made it opaque. "If you don't win, I don't care what you individually do... Being in the hunt is what it's all about." He must have been talking about his own performances and achievements not mattering if the team weren't in contention for pennants. In which case, that is almost exactly the gist of his quote on the 1996 card.

The Circa Stats are more up to date this time, and they have done them by season. The bars all make sense as well.

Circa Thunder disappeared as ownership of Fleer transferred. The cards themselves stand out even in the bold design era of the mid-1990s. The quotes on the cards is a quirk, but a good one in my opinion. It feels like you get more from them than from the regurgitated factoids that appeared on many cards.

And yet again, that's an entire run of base cards in just the one post.