Much has been written about the way Upper Deck stormed the card hobby in the late 1980s. In a few posts I've tracked the evolution of card ranges across what I call the "UD Boundary" which is to the card hobby what the KT Boundary is to paleontology. The KT Boundary is a very thin layer of material between rock layers that was spread all over the planet after an asteroid impact 65 million years ago. Dinosaur fossils exist one side of the KT Boundary and don't exist the other side.

Similarly with baseball cards, base cards with plain backs and little factoids got left behind to be 'excavated' by collectors who admire their ferocious primitiveness after the Upper Deck asteroid impacted on the card-buying public. (I realise that probably the only person I amuse with this analogy is myself, but I do like it.)

The asteroid hit in 1989. Today's cards are from that iconic set. 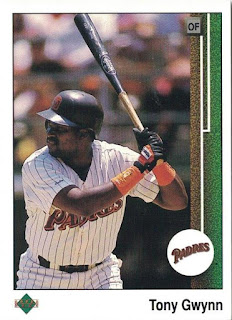 Being honest, compared to a lot of the cards in the 1989 set, this is a bit dull. However, the photo is printed crisply, you can actually see Ton'y face, and it was certainly different enough to stand out against every other card on sale at the time. Even now the quality of the card stock is evident and it is glossy, which again sets it apart from other cards.

And then you turn it over... 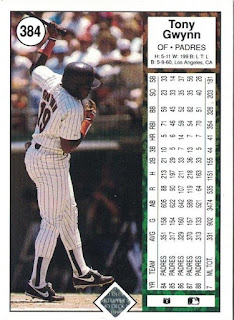 There's a full-length photo with the same gloss and shine as the front. Score had already done photos on the backs of cards the year before, but without the gloss, and not this big. Upper Deck condensed the stats box and ran it perpendicular to the photo.

They also included a hologram to authenticate the card as an official Upper Deck product. It was a very clever gimmick to give the card a much higher perceived value than its competitors. Would anyone really try to bootleg these cards? Who knows, but the hologram implies that they might - something that nobody would ever bother doing with boring old cards from Topps or DonRuss!

Tony had a second card in the set as well. 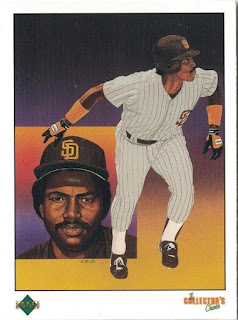 DonRuss had been doing their Diamond Kings range of insert cards with artistic renditions of top stars for a few years by this point. Upper Deck went for a similar look with their team checklists, with artwork by Vernon Wells, who claims to be the "most commissioned sports artist ever". Vernon produced portraits of a star player from each team for the 1989 Upper Deck set, and they featured on the team checklists.

(Vernon's son, incidentally, is Vernon Wells III, who had a 14-year career in Major League Baseball with the Blue Jays, Angels and one season with the Yankees.)

Personally I'm not a huge fan of artistically rendered cards and I have mixed feelings about this one. The portrait is very good and would make a handsome card on its own. The drawing of Tony running doesn't work as well for me. His proportions look a bit wrong and his feet seem oddly small. I realise that's because it's painted from a photo of Tony running towards the camera and the upper part of his body is leaning forward, but without any context around it, he looks to be in an odd crouch.

The checklists in this set also saw the debut of the phrase "The Collector's Choice" which would morph into a huge brand for Upper Deck in later years.

The back of the card is the team checklist. It's as uninteresting as it sounds. 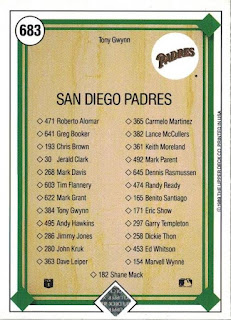 It still has the hologram, though, to help collectors spot fakes!