One Card Only - On the Anniversary of Hit Number One

It's the 19th July. 38 years ago, in 1982, a young baseball player, newly called up from the franchise farm system in Hawaii, started his first game for the San Diego Padres facing Philadelphia Phillies in the evening at Jack Murphy Stadium. In his first at bat he recorded his first major league hit, off pitcher Sid Monge. In 4 at bats in total during the game he recorded 2 hits, scored a run and batted one in.

Although the Padres lost the game 6-7, Tony Gwynn had arrived on the scene.

I really wanted to mark the occasion with a special card about hitting, but then this popped out as I was scanning a pile of cards made by Pacific. 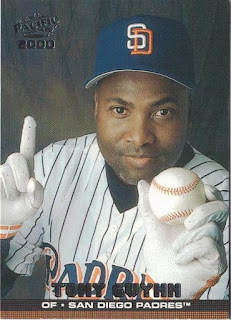 In contrast to the superb photo on the front, the cardback is a little dull (and the dullness is not offset by the wonky scan!) 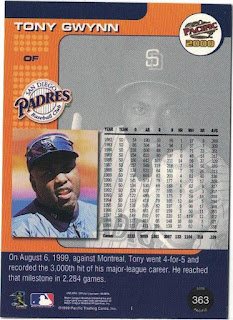 While today I'm commemorating Tony's first hit, this is one of many cards from 2000 that commemorates his 3000th hit, which came almost 3,000 miles away from San Diego, in Montreal. But more of that in a few weeks time!