Back to Base (Camp) - Pinnacle base cards

I've blogged a few Pinnacle cards before. I was trying to work out the relationship between Pinnacle and Score, because the first Pinnacle cards are copyrighted to Score, but then later Score cards are copyrighted to Pinnacle brands. A brief sojourn to Wikipedia later and I now know that the company that made Sportflics lenticular cards changed their name in 1988 and released the first Score sets, and then later launched Pinnacle as a premium brand of cards.

This is all moot now because Pinnacle and Score are just sub-brands of the Panini conglomerate, but it's interesting tracing the connections between these card families.

Pinnacle released their first baseball series in 1992 and that's where this Back to Base post starts. 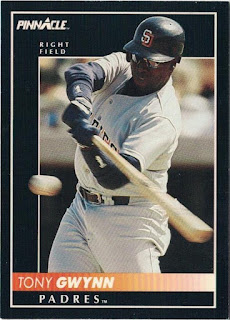 I like this photo. The ball's moving. The bat's moving. Tony's swinging. The lay-out is really clean and effective.

But, the thing with Score is, they did really nice cardbacks! 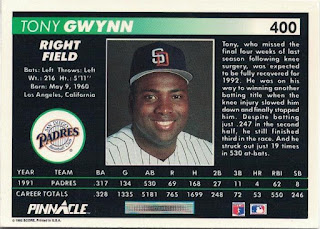 Look at that smile! What a great cardback photo. Score also included a decent length summary of the player on the back, which Pinnacle continued. It's a very positive write up of a season which was ultimately very frustrating for Tony and was cut short because of injury. There's an amazing stat included in there, that in 530 at bats during the season, he struck out just 19 times. That's less than 4% of the time! The number 19 is forever associated with Tony of course, so there's an added irony.

Card Number 169: Pinnacle, 1993; #98
Black borders again. Every card imperfection shows up on the scan. Those marks aren't noticeable when the card is in hand. 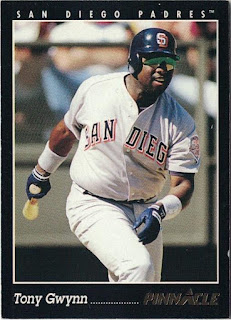 The photo on the front isn't as good as in 1992, and it's not a particularly flattering photo of Tony as you can really see his tummy. Fortunately we know there's going to be a decent reverse side to the card. 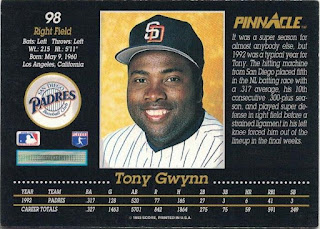 And there it is! Another cracking portrait photo. The summary notes that for the second season running Tony's knee injury denied him the chance to finish the season.

I appreciate the simplicity of the season stats line on both this card and the preceding one. It give it that 'premium card range' vibe. 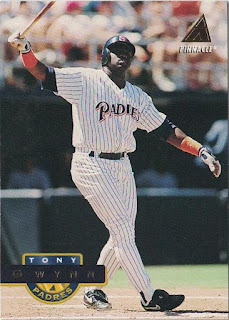 Pinnacle dispensed with borders in 1994, copying the other premium brands of the time by going full bleed on the image. Tony seems to idly swinging the bat in this picture. He might be tracking the path of a foul ball because if that had been a hit he would already be halfway to first base. The name and team design element is pleasantly understated but looks like what other card companies like Leaf were doing at the time.

The photo on the front gets reused on the back, along with a three quarters close up of Tony's face. 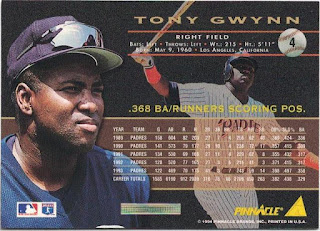 There's no write-up, just a run-of-the-mill stats box. They pull out one extra stat, that Tony's batting average was higher if he had runners in a scoring position. That really underlines his value for the team.

This is also the first Pinnacle card not to mention Score. It's copyrighted to Pinnacle Brands.

Card Number 171: Pinnacle, 1995; #93
So, every card company in the 1990s had one card set where they tried something different. This is Pinnacle's and, without being too harsh on whoever had this idea, the photo montage is the stuff of nightmares. 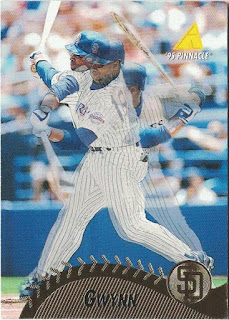 You can see Pinnacle's origins as Sportflics in what they tried to do with this card. Three superimposed images of Tony at the bat and swinging. But it really doesn't work if it's not a lenticular card and it's turned Tony into a three-headed, six-armed monster.

Also, the large block of foil is an indicator of the excess to come in future Pinnacle sets.

The back is comparatively fine. Two photos, no hideous Nineties design choices, and the write up is back - this time focusing on Tony's feat of achieving a batting average of .394 in 1994. 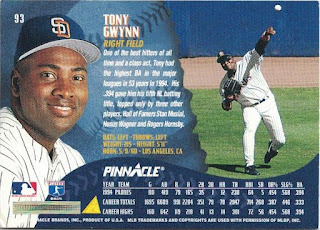 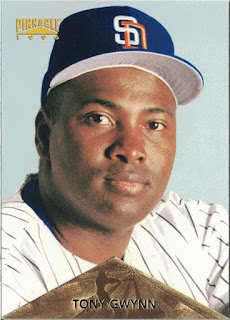 Apart from the pyramid of foil at the bottom of the card, this looks very much like a Studio card. And there is nowt wrong with that! If I had one quibble, they could have moved the card set logo a fraction to the left so it didn't overlap his cap.

The back is similarly very clean. It looks like a card that could have been pulled in the last couple of years. 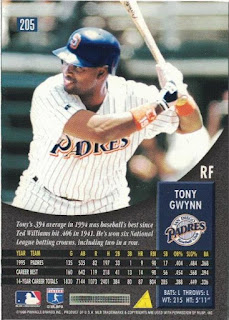 The write up mentions Tony's average in 1994 again, even though he had won the batting title in 1995 as well.

I included Tony's 1997 base card in my previous blog post about Pinnacle cards. For the sake of completeness, here it is again. 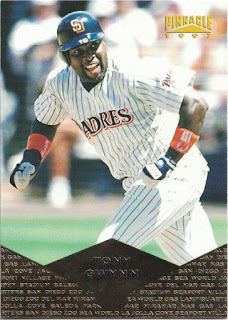 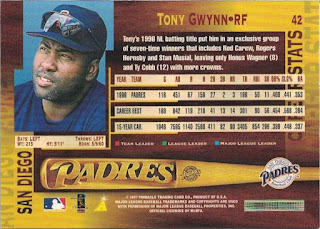 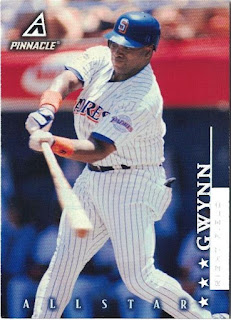 Tony had the very first card in the 1998 Pinnacle set. He was also #1 in Topps's range that year as well. Although it says All Star on the card, Pinnacle didn't do All Star and regular base cards in their 1998 set, so this was his only card. 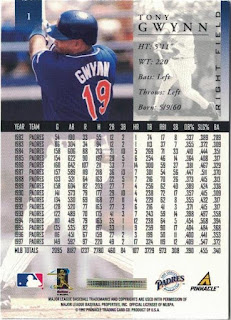 This was also Tony's last Pinnacle base card. Despite acquiring DonRuss in 1996, Pinnacle went bust in September 1998. They were bought by a company called PlayOff who revived the DonRuss brand in 2001 before being bought by Panini in 2009 and rebranded as Panini America.

I know this has been a long post, but it is the entire run of Tony's Pinnacle base cards, tracking the boom and bust cycle of baseball card production in the 1990s. Pinnacle also produced a load of other sets and, of course, Tony features in those. But I'm going to save those for future posts.