Back to Base - Bowman

Some cards today that cross the UD Boundary in baseball card history. 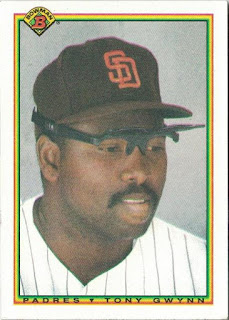 This is a Bowman baseball card in 1990. A goofy photo, fuzzy print, drab colouring, matt card stock. It looked and felt like a cheap and dated product.

Bowman went all out on the stat box on the back though. 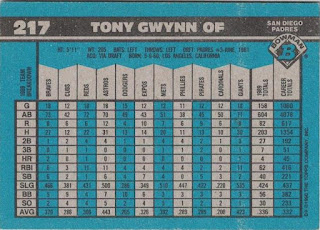 It looks like someone has tried to print an Excel sheet on the back of the card (and that's not an anachronism - Excel 3.0 launched in 1990!). It's Tony's stats against all the different teams in the National League. He got 31 hits against the Astros, and 30 hits against the Giants, who won the League pennant and lost in the World Series. The black on blue print is horrible to read and the figures are tiny. 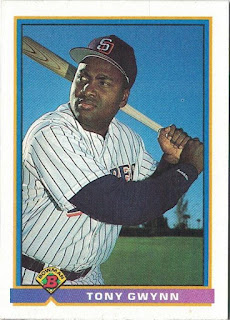 It's a much better photo this year!

The back is a lot easier to read. They are still loving the giant statistical breakdown though. 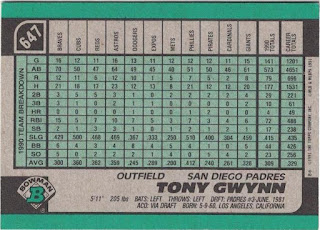 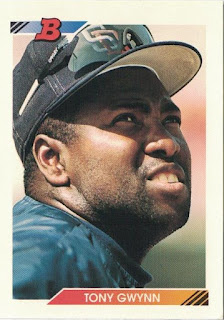 The transformation wrought by the Upper Deck asteroid is no more evident than the difference between the 1991 Bowman cardback and the 1992 cardback. It is so stark you'd almost think this was a different hobby! 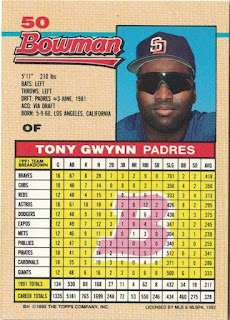 Cool shades! Even the stat box with the breakdown against all the other teams has been livened up a bit with colour and a watermark Bowman logo. The cardback is glossy and a much higher quality. It's also portrait orientation just to shake things up further. 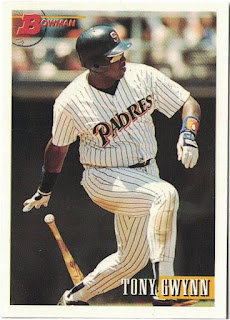 Tony is dispensing with his bat after clocking another hit.

The photo on the back is less flattering. Tony is squinting. Perhaps he should have put his shades on! 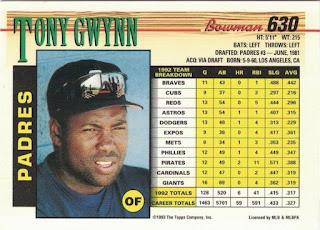 The stats box has dropped a lot of extraneous detail, like, er, hits. The home run column doesn't look impressive. Tony was never a power slugger. He had a particularly good batting average against the Braves the previous season. 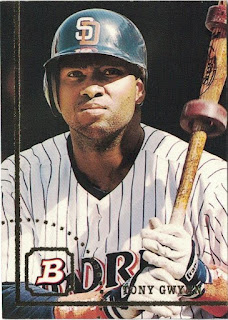 This is the pick of the bunch of the Bowman base cards and shows another step up in quality for the Bowman brand. It's a full bleed photo that captures Tony preparing for his stint at bat. There's foil edging as well.

The back retains the truncated stats box. 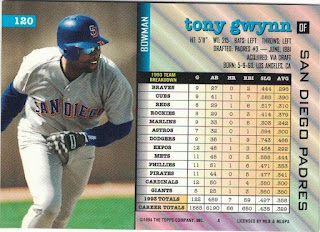 Card Number 224: Bowman, 1995; #304
This card shows Bowman catching up with gimmicky mid-Nineties design. It's the first card to mess about with the photo on the front. 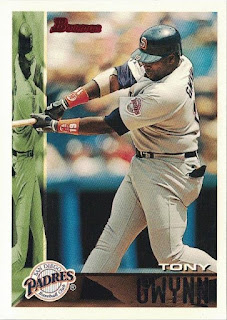 It looks like Tony is smashing a mirror there. The design has also brought back borders, which feels like a retrograde step after the smashing borderless cards in 1994. 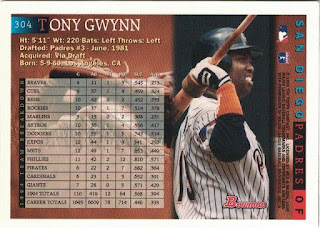 The cardback is a bit awkward to read. Compared to a lot of cards issued around this time it's not completely hideous. Chocolate brown is an odd colour for a cardback though!