Hey, it's Monday. After a short blog post yesterday (because who spend weekends reading blogs?) here's a longer post to enjoy during a worktime coffee-break. I'm posting a load of Fleer base cards of Tony Gwynn. Some of these card designs may look very familiar.

Card Number 26: Fleer 1986, #323
(This card was sent to me recently by Jacob from one of the UK baseball card collecting groups on Facebook - Thanks Jacob!) 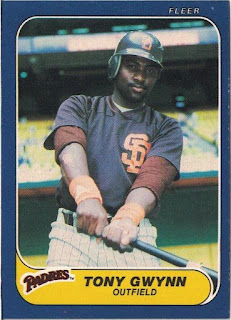 "Swing the bat for the photographer, Tony!" 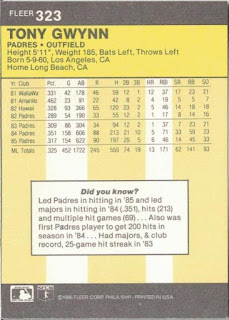 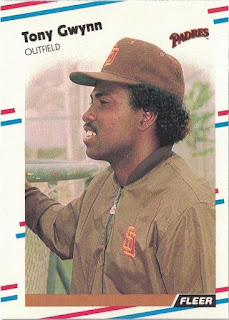 You don't get many profile photos on cards. The red and blue lines scream 1980s to me for some reason. 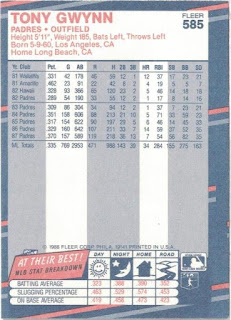 Fleer are mixing it up on the back with the stats. According to this, Tony excelled at night games at home in San Diego. There's some wasted space on this card, though.

Card Number 28, Fleer 1989, #305
Some people really like Fleer 1989. Mainly because it has some very quirky cards in, including the famous Bill Ripken "F*ck Face" card (an hilarious proofing mistake that even has its own dedicated website 31 years later!)

But away from unexpected swears, this card design is mainly... grey. I find it really dull. 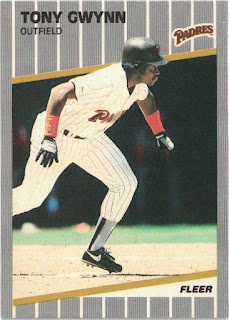 If this is Tony mid-run, the photographer has managed to make it look like he is holding his pose as if the music has stopped in a game of Musical Statues. 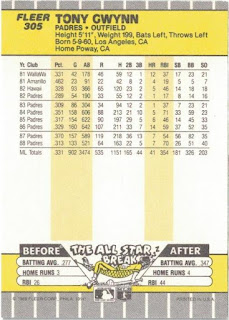 This card's saving grace is the dude napping in the hammock on the back. He's having a break like the All Stars do, you see! The stats reveal that Tony had a poor start to the previous season, but finished strongly. He had an injury that ruled him out of the first part of 1988. 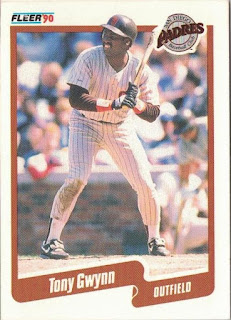 It's not grey, is all I'll say about this uninspiring design. And Tony is actually at the bat. In an actual game. 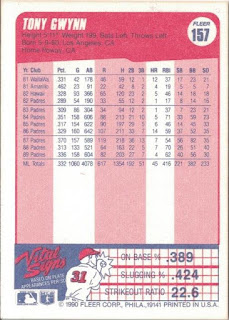 Fleer loved their little stats exercises on the back. I think we would all agree the hammock guy was better. 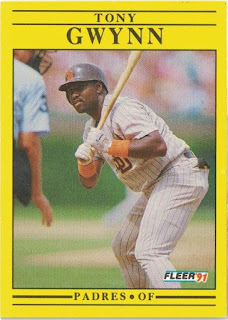 The early 90s was a colourful time. I actually really like the bright yellow on this card, although it always prompts a random memory.

In 2004 we went on a road trip in California and we were driving from San Diego to Death Valley. We stopped in a tiny town that had a tiny strip mall that included a Dollar Tree store. We went into the Dollar Tree for refreshments and that was the first time I saw, and bought, baseball cards in 'repacks'. There were about 30 cards for a buck in these little blister packs. I bought 3 packs. Only the top card was visible on each pack and one of them was a Fleer '91 card of Robin Yount. So this card design always makes me think of Robin Yount. 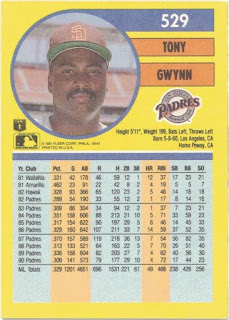 Times they were a'changing in the baseball card world in 1991. Look, a full colour photo on the back! 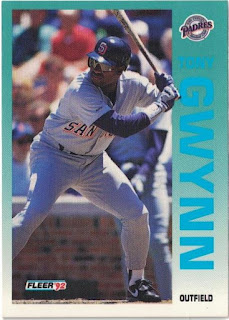 By 1992 Upper Deck was kicking the other card companies' collective butts and everyone had to up their game. Fleer went from cheapie cardboard to gloss. This is a really nice base card. Turquoise was big in the early 90s. In 1992 I had one of those Hypercolor t-shirts that changed colour in the heat (including when the wearer got hot!). It was turquoise. 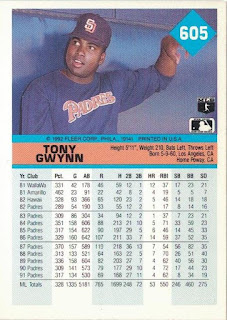 Bit of an odd shot on the back. Caption this, please. 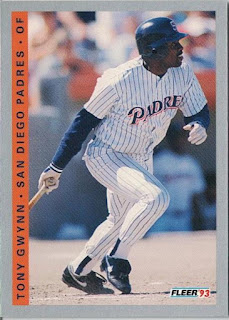 Another hit and Tony is off! 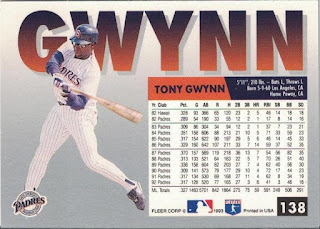 And you thought Tony's surname was big on his 1992 card. I'm not complaining though. It makes up for Fleer's return to grey.

I hope you enjoyed this sheer amount of Fleer.