Back when the web was young... (Online adventures with Pacific)

I have a fairly keen memory of my first experience of the Internet, and coincidentally it was trading card related.

I was at university. We were all issued with email addresses, which we were told was going to be the new way the university would be communicating with us. We were also directed to computers with Internet access in a new computer room.

I was skeptical. The only people I knew with email addresses were my fellow students, who I saw all the time anyway, and I didn't know what I would want to look up online.

But I had started collecting a new Star Wars collectible card game made by Decipher. The cards were full of nerdy facts and character names for those background glimpse-and-they're-gone aliens.

The cards were separated into common, uncommon and rare cards. I was swimming in commons and had no idea how many rare ones were still out there. Then I noticed on the pack there was a website address for Decipher Inc.

I went to the new 'online' room, full of grey-towered Windows '95 PCs, and typed in the web address very carefully. The website opened, and I found I could click and move between pages. There was even a checklist! And I could print it!

I held that printed checklist with all the card names and the little boxes to tick, and felt excited that I had been able to get this information from a computer in a totally different part of the world and print it off right there.

If I told this to anyone under the age of 25 they would probably look at me the way I did when my Dad told me how he used to travel on trains pulled by steam engines when he was a boy. But I vividly recall that first experience of the Internet, and that feeling of being on the brink of something new.

And it all came flooding back to me the other day, when I saw this card: 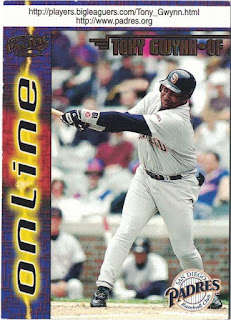 Nothing says "early days of the Internet" more than publishing a really long URL, expecting people to type it in.

This "Online" set is absurdly complicated. There were 780 cards in the set (with 20 variations) and two entire parallel sets, of which this is the 'Web' version.

Web cards are distinguishable from the main set by having gold foil instead of silver and an 8 digit alphanumeric code printed down the right hand side of the cardback (which really went for the online vibe with its Lawnmower Man VR colour scheme). 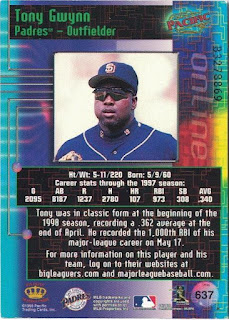 The gold foil versions were one per pack and the code could be used to win "instant and sweepstakes prizes". The packs also said there were 750 players featured, but there were also 30 Team Checklists which also featured a player.

Naturally, Tony was the player on the Padres team checklist. There were two different Tony Gwynn base cards, both numbered 637, in the original set. 20 players had two cards, with different photos on, which was replicated across the two parallel sets.

Pacific also produced a bonus "Sample" card which was a version of the base set with the word "Sample" plastered across the back. That card was yet another different version of card number 637. To confirm this was a Tony Gwynn heavy set, Tony's card was also used as the feature card on the top of the hobby box.

By my reckoning that makes 10 different Tony Gwynn cards related to this set. (And a box!)

I have one of the other cards, from the 'Red' parallel set. 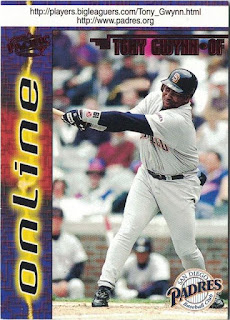 It's hard to tell from the scan, but the Pacific logo and Tony's name are red foil on this card. This card has the same photo of Tony as the other one. The alternative photo has Tony running in a blue uniform.

The back is identical to the other card apart from the printed web code on the right hand edge. Both are below for comparison. 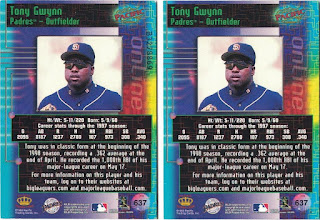 The big thing about this surprisingly complex card set was its online element. The web exploded in the mid-90s. By 1998 we were surrounded by gimmicks trying to get us to go online. It must have felt like the most natural progression in the world to print really long, ugly, URLs on baseball cards to get kids to read all about their favourite players.

Of course, that website no longer exists. But versions of it do linger on in the Wayback Machine. Tony's page has gone and is just a wireframe with a menu down the side, but some of those links still work. Through that I found out that BigLeaguers.com was operated by the Major League Baseball Players Association.

The website included a "chatter" section where fans could pose questions to players in some kind of forum environment. Intriguingly one of the last "chats" on there, in 2000, was with Tony. None of the chat content seems to have been scraped by the Wayback Machine's web crawlers. The last archiving took place on 4 June 2000, after which the website either moved elsewhere or was switched off.

The Padres dot-org address has been lost to posterity as well. All MLB teams now have official sites as part of the MLB.com site.

This has been a long blog-post digging up a fairly recent past that actually feels very distant now. The ubiquity of the web in all that we do has transformed us socially. We are in a completely different online world from 1998, and in their own way, the Pacific card company's decision to print web addresses on baseball cards was just one of millions of small little pushes that got us to this place.