Return to the Studio

I like the Studio range of cards. Here are three more of them, showing an interesting evolution in who owned the studio! 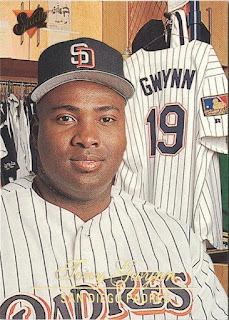 Tony is sitting in the clubhouse here. Or so we presume. But if that's his shirt in the background, what shirt is he wearing? Also, can't the club afford something better than a ratty old wire coathanger to hang the shirts on? 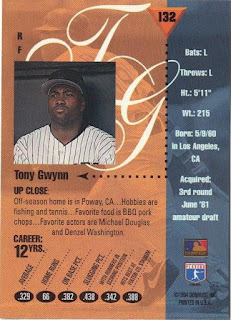 The back claims Tony wintered in Poway, California. That may have been the case in 1994, but I think even then he had got into the habit of spending the winters in Indianapolis, where his wife owned a recording studio. He had season tickets to watch the Indiana Pacers, and used to enjoy going to watch them play in a town where nobody recognised him. He even engaged in a publicity drive for the WBNA team that became the Indiana Fever, buying the 3000th season ticket for the women's team shortly after hitting his 3000th hit.

This card was produced by DonRuss and they have laid out his career stats really nicely here. I appreciate informative graphics and these are easy to read and capture the essential information about the player.

[In 1995 Studio produced a range of cards that looked like credit cards. At some point I will create a wants list and Tony's Studio 1995 card will be on it!] 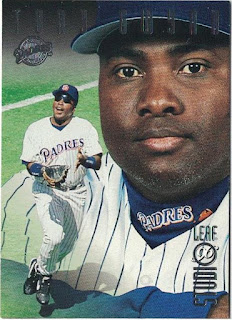 The Studio range was branded as a Leaf product in 1996. Leaf was now part of DonRuss. Tony has a bit of salt and pepper stubble in the portrait photo on the front, and an odd expression in the inset.

I like how the O in "Studio" is used as a cameo inset on the cardback. 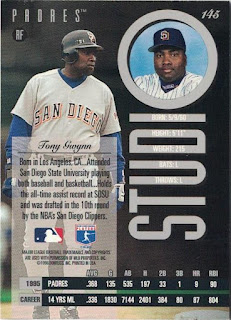 This looks like a four photo card, but the cameo is the same photo that was used on the front. The factoid is about Tony's college basketball achievements. He is still, in 2020, the all-time San Diego State record-holder for assists. 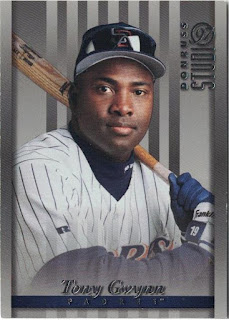 DonRuss took the Studio range back from Leaf in 1997. This is a very stylish card. It's a lovely portrait photo and the silver stripes look classy. 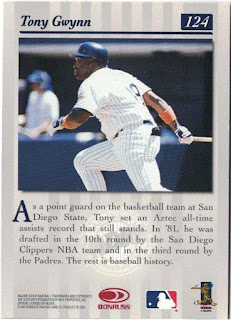 The cardback is still all about Tony's college career and his drafting by both the NBA Clippers and the MLB Padres. His entire subsequent career is summed up as "The rest is baseball history."

DonRuss was actually part of the Pinnacle empire by now, although there is no mention of that on this card. A Studio set was produced in 1998 before the range went on hiatus until a set was released bearing the name in 2005. Studio is yet to return since DonRuss and associated brands have been acquired by Panini, which is a shame, because these cards with their portraits and interesting card backs are something different and have great appeal.