It feels incredible how many card ranges Fleer pumped out around the turn of the century. Today we focus on sets called Fleer Focus, which were issued for four seasons from 2000 to 2003. Like previous short-lived ranges, the cards are fairly ordinary. However, they do have a couple of little quirky features that make them endearing. 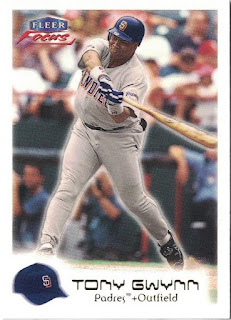 I like the cap with the team logo on. The photo is oddly photoshopped and strangely cropped. The font is, frankly, terrible. But I like the little cap. It seems such an obvious motif and yet very few card ranges use it as a way of showing the logo.

The cardback has a summary of the previous season, which featured two double-figure hitting streaks. 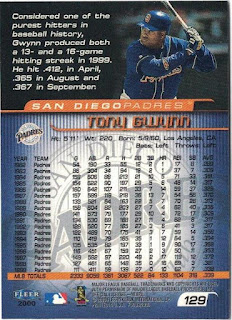 Below the blurb is a massive stats box. There is a lot of data there. I like the way they used the logo as a watermark behind it though. 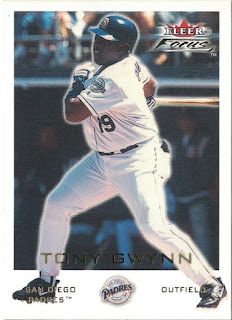 The front isn't as good as the previous season. They've recoloured the card set logo, but the team name is printed over his foot and Tony's name is awkward to read in real life, not just on the scan. It's foil so it stands out a bit more with the card in your hand. But only a bit more. It's a shame they didn't keep the cap! 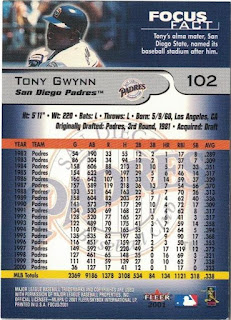 The 'Focus Fact' is a good one. What they don't tell you is that Tony helped get a large investment into the university's new ballpark, and he also wanted the university to name it after his baseball coach, rather than after him. But telling you all that would take up too much room.

Fleer Focus ran for a couple more years before being pulled, but Tony retired at the end of 2001 so didn't feature in the following series.