Around the turn of the century, Fleer produced several short-lived card sets. Today's Monday mixer features three of them that many people have probably forgotten all about.

Fleer's influence in the baseball card hobby is huge. It was a lawsuit brought by Fleer that broke the Topps monopoly in 1981. But the card company struggled as the hobby expanded. In 1992 Fleer were bought by Marvel Entertainment Group (MEG). In 1995, MEG bought the Skybox card company and merged it with Fleer to form Fleer/Skybox.

Then in 1996, MEG went bust, and in the sell-off of assets, Fleer/Skybox were eventually bought by Alex and Roger Grass. Alex was the founder of the Rite Aid chain of drugstores, and Roger was one of his sons. In 2005, Fleer/Skybox suspended its trading operations and everything went up for auction. Upper Deck bought the brand name and issued Fleer cards for a couple of years, but the brand has been on hiatus since 2007.

The cards today come from after the Marvel ownership when the company was trying to establish some new ranges. None of them stuck. 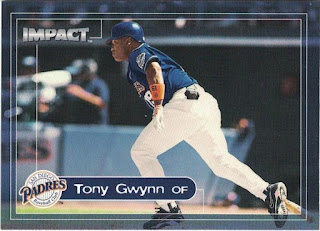 Fleer Impact was a one-season wonder, with 200 cards in the set. It has nice framing on the card front, even though it's not very impactful as a design. 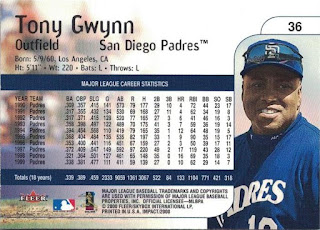 The back is similarly devoid of impact. The stats box only runs from 1990, which is arbitrary. Personally, I think you should either have a full stats box, or have a small stats box. There isn't much point having one that only shows half a career. 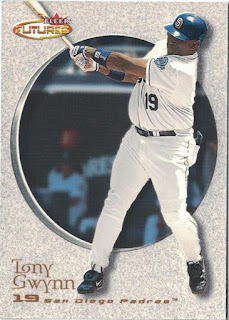 There's a splash of turquoise on the back, although technically I think this counts as a 'teal and orange' combination, the ubiquitous Hollywood effect. 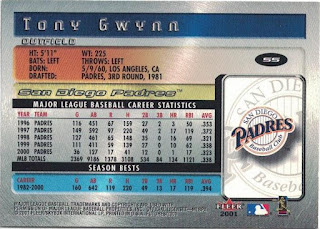 There is a real mix of fonts on the back as well, including what looked at first glance to be the team name in the font used on the Grand Theft Auto games. (It's not that font; I checked.)

There were black parallels to this card. I think they had glitter too. Tony had at least one insert card as well, but sadly I don't have a copy to show you. 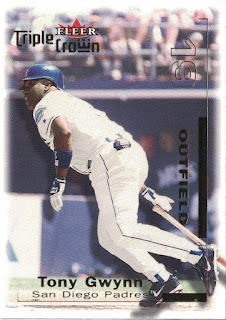 This was another short-lived range, although it lasted for 2 seasons, so twice as long as Impact and Futures. This was the first season it was available and as it was Tony's final season, he didn't have a card in the 2002 release. 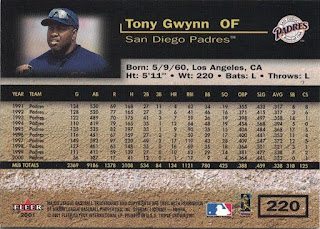 The cardback is another one dominated by a large, yet incomplete, box of statistics. And, yes, as far as I can tell that is literally a picture of baseline dirt at the bottom of the card.

The one thing all three card-sets have in common is that Tony only had one base card during the entire, very short, lifetime of each range. So in a way today's post is showing you Tony's complete card run in these forgotten Fleer releases.