Saturday round up - filling the gap in Stadium Club

I mentioned in one of my posts about Stadium Club how I discovered I had a gold parallel of a card that I thought was just a base card. And I didn't have the base card.

What was particularly galling is that I had just sent a load of cards back to Gawain, who had sent me a box of Tony Gwynn cards to look through. I was fairly certain one of these Stadium Club cards was in that box, so I sent a grovelling apology to him and asked if he could check.

Fortunately he is a top bloke and didn't mind fishing through the box, finding the card, and then sending it to me. I am greatly appreciative because that means I can now say I have the complete run of Tony's Stadium Club cards that were issued during his career.

And with no further ado, here it is... 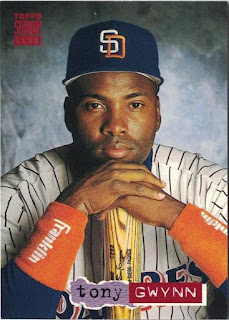 The front has a red logo and a red background behind 'Gwynn'.

The back is exactly the same as the parallel, complete with a slew of fonts and trippy background. 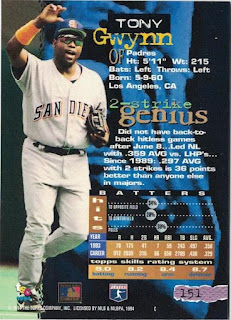 The thing that struck me about this card, seeing it with the red name tag, is how that looks like a name tag printed off a Dymo Label Maker. Dymo still make labelling devices, but labels that looked like the name label on this card are a real 90s technology throwback. There was even a Seinfeld episode that revolved around a label-maker in 1995, when Jerry and Elaine suspect another person of "re-gifting" unwanted presents to other people.

Speaking of throwbacks, the card from Gawain arrived on the same day as an item I won off eBay, making it a even better mail day. At the risk of alienating people who have come here to read about baseball cards, here's me in a photo taken a few seconds after I tore open the parcel. 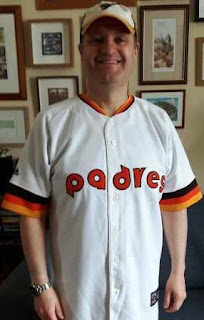 It's not a genuine vintage shirt. It's by Majestic as part of their Cooperstown Collection. Still, at less than £20 including postage I'm well chuffed with it.

And that's the end of today's Saturday round up.