Writing about my own university days in yesterday's blogpost reminded me of a few cards I own that feature Tony in his college playing days.

Tony earned a scholarship to San Diego State University, but to play basketball. He played Point Guard for the SDSU Aztecs for four seasons and still holds the following records for them:


Despite his scholarship, eventually Tony was allowed to represent the Aztecs at baseball as well. He was drafted to the NBA San Diego Clippers and the MLB San Diego Padres after college, and opted for baseball because he felt that would offer him a longer career.

There are trading cards with pictures of Tony as a basketball player. However, the ones in this post show him playing college baseball.

Card Number 147: Panini Contenders, 2015; #91
It should come as no surprise that Panini, the masters of licensing loopholes, found a way to produce interesting baseball cards without a MLB licence. This card is an "Officially Licensed Collegiate Product". Well, it's a bit of money for the alma mater. I'm sure none of the players would mind. 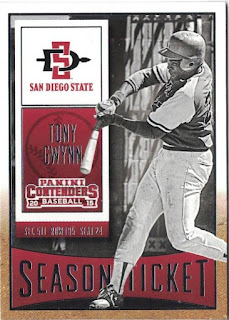 I think this is quite an attractive card, but as we will see they made the most of that photo.

Here it is again on the back. 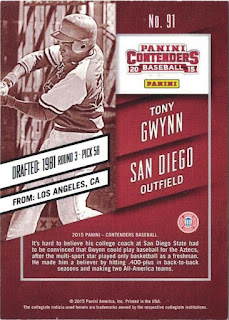 There are 99 cards in the base set featuring contemporary players like Aaron Judge who had been drafted just two years previously and hall-of-famers like Tony, Dave Winfield and Ozzie Smith.

There were also several insert series in the set, including the next card.

Card Number 148: Panini Contenders, 2015; #O-14
I told you that photo was doing a lot of work for Panini. Here it is on a second card. This verson is less cropped and shopped than on the base card, but is also less crisp. 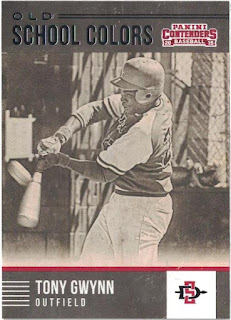 Guess what photo they used on the back of the card. 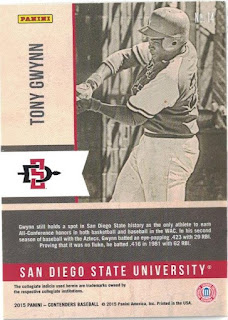 Yes, there it is again. I don't know if this is a record for numbers of times the same photo has been used in a card set, but it's got to be in there somewhere. There were 47 cards in the "Old School Colours" insert series.

Panini weren't the first card company to use photos of famous players in their college days to get round licensing restrictions. The year before this Panini set came out, Upper Deck included Tony in their 'Legends' section of their 'College Colors' range.

Card Number 149: Upper Deck College Colors, 2014; #7
I think the choice of a black and white photo is deliberate to invoke feelings of 'it was a long time ago...' 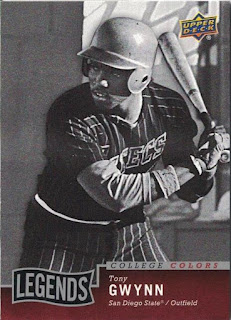 One thing about this photo is that at least you can make out most of the word 'Aztecs' on Tony's uniform.

Like the Panini cards, the photo is re-used on the back. 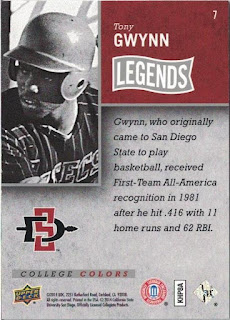 This is another "Officially Licensed Collegiate Product". That licensing stamp is a new one on this blog and makes a change from the MLBPA or the National Baseball Museum and Hall of Fame, which are two other organisations licensing photos to baseball card companies while MLB restricts their official licence to just the one company.

Incidentally, this 26-card set is listed as a 'promo' set on Trading Card Database and is a multi-sport set, not a baseball card set, with 13 legends and 13 'rookies' from various sports. Other "legends" with cards in the set include Michael Jordan, Peyton Manning and Tiger Woods.

The craft of baseball card companies to find new ways to print 'official' cards of players using innovative licensing makes me wonder if eventually we will get cards with Little League photos of Major Leaguers. Panini have gone a step in that direction already.

Card Number 150, Panini Century, 2010; #34
Before he went to university, Tony went to Long Beach Polytechnic High School. Given that he is wearing a sweatshirt saying 'Poly' on it, I think it's a reasonable assumption this is a photo of him in high school. 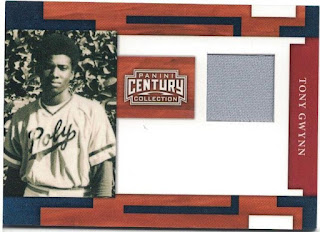 Yes, the grey square is a small scrap of cloth. This is a relic card. The weird chunk of white space is because there were autographed versions of this card. This is the unmarked version but the space for the auto is still there. 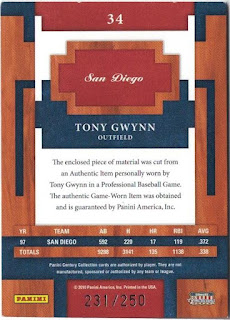 It's a pretty dull cardback, although it is serially numbered. The blurb about the cloth patch says it is from a game-worn item, but there isn't any detail about the game. I don't know why card companies  don't specify in which game, or games, the items were worn. It seems like that would be information they would know if the items are as authentic as they say they are.

That feels like a nice way to reach the 150 card mark on this blog!